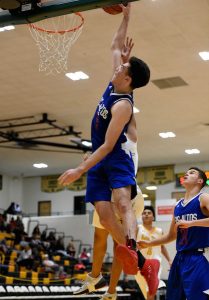 LA VERNE — Playing smart basketball is an axiom that is often said by coaches. Unfortunately, it’s one of those things that is a lot easier said than done.

For the Los Altos High boys team, though, playing smart basketball is a little bit doable when you have six seniors who have two or three years of varsity playing experience.

Although the Conquerors (10-2) struggled mightily with playing efficiently in the first half of Friday’s game against Notre Dame Riverside in the Classic at Damien tournament, a strong defensive output by those veterans in the second half led Los Altos to a 69-54 victory over the Titans in the Gold Division semifinals.

The Conquerors will face undefeated Eastvale Roosevelt in the division’s championship game Saturday at 5:30 p.m.

For Los Altos coach Jeff Lucas, the Conquerors’ ability to hold the Titans (8-3) to just 17 second-half points was a result of the team’s collaborative defensive effort that was spearheaded by its seniors.

“You know I think our veteran leadership played smart,” Lucas said. “In the first half I don’t think we played smart at times but we didn’t have too many turnovers there in that second half and we took good shots and we played hard. We really played hard tonight, that’s what it took and with the leadership it got us over the hump.”

One of those veterans is junior shooting guard Jarod Lucas, the coach’s son, who finished with a game-high 19 points.

The Conquerors also got a boost from seniors Julian Lopez and Danny Plascencia, who each scored 10 points for Los Altos.

Los Altos took a 46-44 lead on a basket by junior guard Isaiah Barcelo with 4:07 remaining in the game. After a defensive stop by the Conquerors on the ensuing possession, Plascencia hit a 3-pointer, which extended his team’s advantage to five. It was Plascencia’s second 3-pointer of the second half.

The other one he connected on came with 1:28 remaining in the third quarter, just 21 seconds after Jarod Lucas hit a 3, which ultimately helped Los Altos erase an eight-point deficit down to two.

However, the 3-pointer Plascencia made in the fourth quarter was significant. It sparked a 20-10 run in the final 3:37 of the contest.

“We started to take control but obviously it starts at the defensive end,” Jarod Lucas said. “But we had a lot of big shots. Danny Plascencia hit some key 3s, Bryant (Howling) made some key finishes and did a good job of handling the ball and Julian Lopez did a good job of finishing the easy ones. So we did a good job today.”

Meanwhile, Notre Dame Riverside coach Robert Robinson felt like the Titans just didn’t do an adequate job of sticking to the effective game plan that propelled them in the early stages of Friday’s contest.

“Throughout the game they switched man-zone. They didn’t do anything different in the second half,” Robinson said. “We just played too selfish. Too many guys taking too many shots outside the offense. Once that started it just rolled downhill from there. Then the next guy would go one-on-one and the next guy would go one-on-one. We didn’t trust each other and we were undisciplined.”

It didn’t help the Titans either that their go-to guy, senior forward Anthony Holland, was almost nonexistent in the second half. Holland, who scored a team-high 14 points, only had a pair of field goals in the second half after compiling 10 points and six rebounds in the first.

“We started to front him and had a lot of backside help and so that really slowed him down,” Jarod Lucas said. “They kind of struggled (after that) becuase he was their main offense right there. Stopping that was big for us.”

Howing recorded nine points and played a valuable role for Los Altos down the stretch with six second-half rebounds.