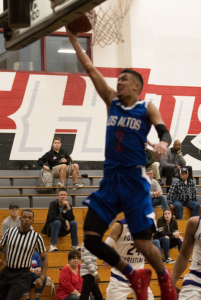 Jarod Lucas has been named the SoCal Prep Legends Athlete of the Week for his efforts over the Winter Break in helping the Conquerors capture the Damien Classic Tournament Title and take down Maranatha in the Jordan Take Flight Challenge. Lucas was named the most valuable player of the Damien Gold Division tournament after leading the Conquerors to a 60-58 victory over Eastvale Roosevelt in the championship game. Lucas not only finished with a game-high 18 points, but he hit a half-court shot at the buzzer to give the Conquerors the win. “I told one of the guys, ‘Make sure you hit me. I’m going to hit this,’” Lucas said. In a nonleague showcase game last week, Lucas scored 32 points in a 69-53 win over Maranatha and became the school’s all-time scoring leader. The Conquerors are the Tribune’s #1 ranked team, #3 in CIF Division 2AA, and #16 by the LA Times.

What is SCPL?: The best athletes in Southern California will be honored at an end-of-the-school-year awards show. For more details visit socalpreplegends.com, where you can also vote for the SoCal Athletes of the Week, as well as Play of the Week.