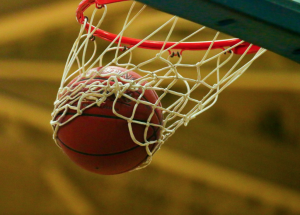 The Boys & Girls Basketball teams are off to a great start to the new year. Both teams got big wins this week over league rivals Walnut and Charter Oak to take control of the league and put their opponents on notice. Both teams opened Hacienda League play on Wednesday and got huge victories over Walnut.

Ulani Rouse-Wells led the Lady Conquerors to victory on Wednesday with her dominance in the paint. Ulani scored 15 points, racked up 18 rebounds and blocked 5 shots.  That impressive performance helped the Conquerors hold off the talented Mustangs and pull out the 4 point victory 51-47.  Friday’s victory over Charter Oak showed just how dominating this squad can be when firing on all cylinders.  The suffocating Conqueror defense held Chargers to just 2 points in the 1st quarter. The Lady Conquerors dominated Charter Oak en route to a 61-16 victory. The girls host Chino and West Covina on Wednesday and Friday.

The Boys also took care of business this week as Jarod Lucas continued to show Southern California why he is one of the top players in the area. Lucas dropped 45 points on Walnut, including 11 rebounds and 8 three pointers.  The Conquerors ran away with the victory 72-46. Friday proved to be a little tougher test for the Conquerors as the physical Charter Oak defense held the Conquerors in check in the 1st half. The Conqueror lead was down to three points halfway through the 3rd quarter.  That was as close as things got as Lucas and Julian Lopez took over the game and put the Chargers away.  Lopez had 24 points, Lucas had 20 and Bryant Howing added 9 more in the 68-51 victory. The Conquerors also participated in the Orange Lutheran Hoopfest on the Martin Luther King Jr. Holiday. The boys battled South Bay heavyweight Rolling Hills Prep in a tight ball game in which Jarod Lucas led the team with 24 points as the boys added another win to their record with a 62-57 victory. The Boys are 15-2 are currently ranked #14 in the LA Times latest rankings.