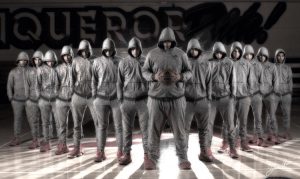 It was a quick start for the Los Altos High boys basketball team in its CIF Southern Section Division 2AA second-round matchup against Hart on Friday.

The host Conquerors jumped out to a double-digit lead to start the game, only to see the lead cut to two at the start of the second half after three quick turnovers.

Lucas tallied 14 points of his 41 points in the third quarter, helped restore the Los Altos double-digit lead and the Conquerors went on to defeat Hart 73-59 to reach the quarterfinals for the first time since 2015.

“Down the stretch, we had that mentality of going there and handling business,” Lucas said. “We got a group full of seniors and it’s a ‘never-give-up’ mentality.”

“Once they started sagging on me on some of the screens, it opened a lot of threes and they started playing me tight,” Lucas said. “So I was open for a lot of kick-outs.”

Hart’s Caleb Waldeck led the Indians with 20 points on 6-for-12 shooting from the three-point line.

“We talked about getting it out to our shooters,” Los Altos head coach Jeff Lucas said. “It’s a team effort defensively, though. The defense helped us win the game in the third and fourth quarters. It got interesting there at times with the turnovers, but we took care of the ball.”

Los Altos struck first with a 10-0 run in the first quarter before Hart battled back in the final minutes to make it a four-point Los Altos lead.

The Indians found their shot and kept it a close three-point game, but Lucas added five points and kicked out to teammate Dion Porter for a three to make it a 32-23 lead.

The Conquerors eventually led the Indians by 11 before Hart clawed back to make it a 34-30 Los Altos halftime lead.

“We moved the ball and did a better job on the defensive end,” Hart head coach Tom Kelly said. “We lost sight of the (two-point shots) a couple of times and paid for it.”

Hart forced three straight Los Altos turnovers to start the second half, but only scored once on those three possessions to cut the lead to two.

Lucas eventually pulled the strings in the third quarter to restore Los Altos’ 11-point lead.
“We were supposed to help any time (Jarod) put it on the floor,” Kelly said. “We lost him a few times, and it hurt us.”

Hart’s Whiten Dominguez fouled out and Los Altos pulled away in the final quarter behind Lucas’ 10 consecutive free-throws.

Los Altos will travel to Santa Monica on Tuesday to take on Crossroads. The Roadrunners are the 2nd place team from the Gold Coast League. They are 18-8 overall and defeated Rancho Cucamonga and Camarillo in the first two rounds of CIF.