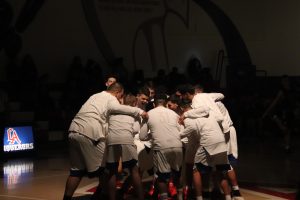 On Tuesday, the #1 seeded Boys Basketball team traveled to Santa Monica to battle against the Crossroads Roadrunners. Along with the team, 2 busloads of Conqueror Crazies, and hundreds of parents and Conqueror faithful braved the traffic to be part of an amazing atmosphere.

The game was an intense battle in which the Conquerors trailed for most of the first half.  At halftime, Los Altos trailed 33-27 but the second half would be a different story.  Julian Lopez set the tone as he drained a 3-pointer to start off the second half scoring and the Conquerors took a 35-34 lead early in the 3rd. Crossroads fought back and finished the quarter with a 3-pointer at the buzzer to put the Roadrunners up 49-44. The 4th quarter was much tighter affair as Los Altos kept the score within 3 points for the duration of time, even tying the score multiple times. With under 2 minutes to go, the pace of the game slowed as the Conquerors were sent to the line to knock down free throws. With less than 20 seconds to go on the clock, the in-bounds play from the baseline left Isaiah Barcelo wide open for a game tying layup. Crossroads then pushed the ball down the court and scored a contested layup with less than 1 second on the clock to seal the 69-67 victory and end the Conquerors season. Jarod Lucas led the Conquerors with 24 points to go with Julian Lopez’s 20.

It was a heartbreaking way to end the season for a team that posted the best record in 35 years (25-4), earned a #1 CIF Seed, and clinched a 3rd straight Hacienda League title. Although the outcome was not what was desired, the experience and memories for those that were there to experience it all will not be forgotten.

Lucas Named Player of the Week 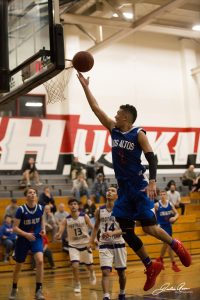 On another note, Jarod Lucas was once again named the SoCal Prep Legends Male Athlete of the Week for his 41 point performance in the playoff win over Hart last Friday. After a bye in the first round of the CIF Southern Section Division 2AA playoffs, Lucas made sure the Conquerors would take advantage, scoring 14 of his 41 points in the third quarter to lead to a 73-59 victory over Hart. The win sent the Conquerors to the quarterfinals for the first time since 2015 where it faced off with Crossroads.

What is SCPL?: The best athletes in Southern California will be honored at an end-of-the-school-year awards show. For more details visit socalpreplegends.com, where you can also vote for the SoCal Athletes of the Week, as well as Play of the Week.