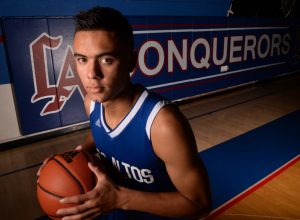 The reason for Los Altos’ boys basketball resurgence the past few years began with the arrival of Jarod Lucas, who has been nothing short of spectacular since he arrived two years ago as a freshman.

Lucas, a 6-foot-3 junior guard with plenty of college offers, turned it up a notch this season, averaging 26.2 points with 7.4 rebounds and 4.2 assists per game with 99 3-pointers.

He led Los Altos to a 25-4 record — its most wins in 43 years — and a Hacienda League title as it went 10-0 and also won the Gold tournament at the Damien Classic.

Los Altos was the top seed in the CIF Southern Section Division 2AA playoffs, but a tough draw saw it lose a close game to Crossroads in the second round. Crossroads went on to win a divisional state title.

For his efforts, Lucas has been named the San Gabriel Valley Tribune’s 2017-18 Boys Basketball Player of the Year.

Lucas was referring to passing Los Altos’ legendary Mike Smith’s all-time mark along with previous record holder Chapelle Brown. Lucas has 2,167 career points, and he still has his senior year to go.

“I also hit a big shot (half court) winning the Damien tourney championship and made a memory that I will never forget, giving Roosevelt their first loss of the season,” Lucas said. “But by far the most satisfying part of this season was playing with my teammates that I have been playing with since third grade.

“Winning player of the year is a blessing and I couldn’t have done it without my teammates. Over the years, I have read about the great players that have received this recognition and have kept it in my sights even to the degree that I have the most recent recipient articles in my locker.”

Lucas’ work ethic is what sets him apart.

“I could not do it without God,” Lucas said. “During the season, I am in the gym before school every day getting up shots, multiple times a week in the weight room and at lunch or after practice.”