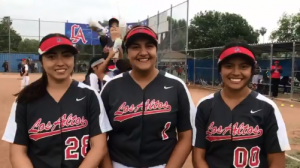 The Los Altos High School softball team introduced itself to the CIF Southern Section Division 1 softball playoffs with not one heart-pounding comeback, but two.

The surreal ending finally came when Kelly Monroy’s bases-loaded walk-off hit to center scored Anyssa Aguilar in the eighth inning to lift Los Altos to a 4-3 victory over Camarillo to advance to Thursday’s quarterfinals where it will host Great Oak, who advanced by knocking off fourth-seeded Orange Lutheran, 8-5, in nine innings.

Los Altos coach Lydell McCullough has seen his team come back before, but doing it with the season on the line is what it’s all about.

“Just when you think we’re out, we just find a way.” McCullough said. “All the seniors stepped up, I’m just really speechless. We have so much heart. I’m so proud of these girls.”

Los Altos trailed in the seventh when pitcher Savannah Diederich led off with a walk. That set the stage for Brianna Santos, who smacked a towering homer to left center to tie it at 2-2.

“I had to do something,” Santos recalled. “We’re down 2-0 and it was the seventh inning and I wasn’t going down without a fight.

“I went up with all the confidence I could have, and I really tried to pull through for my team and to see us all celebrate, it was awesome.”

McCullough knew entering the playoffs that being good wouldn’t be enough, that along the way they had to be special to advance.

Santos’ home run was just that.

“She got a pitch she could handle and she made the most of it,” McCullough said. “She was battling that at bat and she was out in front the first two strikes and she decided to let the ball come to her a little bit more and boy she crushed it.

“What more can you say about that?”

But it wasn’t over.

Camarillo’s Sarah Urrea led off the eighth inning with a walk and eventually scored on Emily Bartlett’s two-out double off the fence to push the Scorpions ahead, 3-2.

Once again, Los Altos was down to its last three outs and had to come back all over again. Bailey Chavez opened the bottom of the eighth with a double to right.

After a sacrifice moved Chavez to third, Jocylyn Vidal delivered the game-tying single to make it 3-3.

After Diederich and Santos walked to load the bases, Monroy delivered the winner with a single up the middle to score Aguilar (running for Diederich) to send the Conquerors into a wild celebration.

“It feels amazing to keep moving on,” Monroy said. “I knew we would come back.”

Diederich, who pitched all eight innings, struck out eight and gave up five hits. She’s been the catalyst in the circle all year and kept reminding her team to never give up.

“I was really emotional with my team,” Diederich said. “We love each other so much that the thought that this could be our last game hit all of us.

“We just knew we weren’t done yet. We want to win, we want to keep playing and nothing was going to get in our way.”

Calabasas took the lead in the fourth inning on Rachel Hurtado’s double that scored Lindsey Shaver. Hurtado, who took third on the throw home, scored on Lauren Cowan’s squeeze for a 2-0 lead.

See all the Highlights from the Game in the Video Below