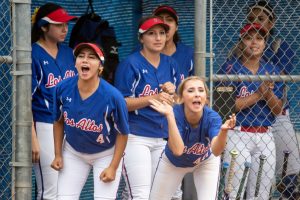 The Los Altos softball team didn’t need any miracle comeback like it got earlier in the week when it rallied twice to beat Camarillo in the second round in eight innings.

Diederich, who is heading to the University of Mississippi in the fall, threw a three-hit shutout and retired the last six hitters to lead Los Altos to a 2-0 victory over visiting Temecula Great Oak in the CIF Southern Section Division 1 quarterfinals on Thursday.

It was quite a performance considering Great Oak’s talented cast, which boasts Oklahoma-bound Quincee Lilio and others such as Candace Yingling (Cal), Matalasi Faapito (New Mexico State), Kayla Edwards (Army), Sara Kinch (University of Minnesota) and Darbie Stancil (George Washington) — a big-hitting lineup that produced 219 runs this season and knocked off fourth-seed Orange Lutheran 8-5 in the second round.

“We knew Great Oak was a hitting machine,” Diederich said. “I just wanted to locate and give my team a chance to win.”

She obviously did more than that.

“Her command was there,” Los Altos coach Lydell McCullough said. “Her rise ball, her drop curve, her change-up. She was able to throw them off balance.They hit a couple balls hard, but she trusted her defense and we made the routine plays behind her.”

Los Altos did all its damage in the fourth inning.

Laila Arditto singled to lead off the inning and was moved over on Bailey Chavez’s sacrifice bunt.

Melissa Felix singled Arditto home and the Conquerors added another run when Diederich’s fly to left was dropped, allowing another run to score for a 2-0 lead.

Great Oak’s (22-6-1) best chance to rally came with runners on the corners in the fifth inning, but pinch hitter Leia Larson struck out to end the inning.

“(Leia’s) been hot off the bench and she came up with a big hit against Orange Lutheran on Tuesday so we went back to her,” Great Oak coach David Mercado said. “It didn’t happen this time. We tried to catch lightning twice but it didn’t work out, it is what it is.”

Mercado also had some nice words for Diederich.

“She threw a good game and they’re a good team and did what they had to do today to move on,” Mercado said. “It was the first one to make a mistake and that would be us. We hit some balls hard, but we hit them right at people.”

Los Altos (28-2) advances to host top-seed Norco (26-3) in Tuesday’s semifinals after Norco advanced with a 6-5 victory over Huntington Beach in nine innings.

Norco is the No. 1 ranked team in the state by MaxPreps and Los Altos has played them twice over the past two years, losing each time, including February’s 2-0 loss.

“It’s a tall task,” McCullough said. “We played her (Norco pitcher Sarah Willis) 14 innings the last two years and we haven’t scored a run off her. And then you have to deal with their nine Division 1 players in the lineup.

“But our girls are chomping at the bit so we’ll go for it and be aggressive.”

Willis was a freshman at Ayala last season beating Los Altos in the playoffs before transferring to Norco and beating them earlier in the year.

Los Altos’ players were so eager to get ready for Tuesday that they were practically begging McCullough to add practices over the holiday weekend.

“We have so much love for each other that we’re willing to do anything to get this win for our team, community and school,” Diederich said. “We want to win so bad for everyone, not just us.” 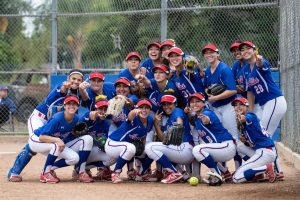