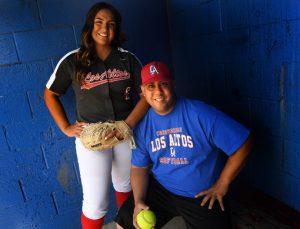 The 2018 Softball season saw the Lady Conquerors soar to new heights as the team finished with the best record in school history, 28-3, were ranked nationally most of the season and finished with a national ranking of 41st  and 11th in the state according to Max Preps, and finished as a semifinalist in the state’s and maybe the countries toughest division the CIF Southern Section Division 1.

The team’s amazing season has earned many Conquerors All-Area and All-League recognition. Savannah Diederich and Coach Lydell McCullough have been named Player and Coach of the Year for the second year in a row. Being awarded this title is such an incredible honor, but to earn it in back to back seasons is even more amazing and a real testament to the dominance of this senior class over the past two years. Others also earning First Team All-Area Honors are Mikayla Ceballos, Kelly Monroy, Brianna Santos and Jocylyn Vidal. Bailey Chavez and Melissa Felix were named All-Area Second Team. Diederich was also named Hacienda League MVP for the 2nd year in a row and seven other Conquerors earned all-league honors. Among the first teamers are Mikayla Ceballos, Kelly Monroy, Jocylyn Vidal and Brianna Santos. Bailey Chavez, Melissa Felix and Danielle Michaels were named 2nd Team All-League.

Player of the Year: Savannah Diederich

The Los Altos High School softball season was a thrill ride, and at the controls was senior pitcher Savannah Diederich. She was gritty, she was determined, and she simply stood above the rest in leading the Conquerors to a remarkable 28-3 record, an undefeated run to the Hacienda League title, and a yes-we-can march to the CIF Southern Section Division 1 semifinals, something almost unheard of for a bunch of neighborhood players in arguably the country’s toughest division.

Diederich, a University of Mississippi signee, pitched every game for the Conquerors, who had 28 victories. She finished with a 1.50 ERA and 251 strikeouts, which was simply an amazing accomplishment considering the tough nonleague tournament schedule the Conquerors played to prepare for the postseason. And if that wasn’t enough, she also hit.374 with 23 RBIs, 10 doubles and two home runs.

For her efforts, Diederich has been selected the San Gabriel Valley Tribune’s 2018 softball player of the year for the second consecutive season. She also was named the Hacienda League MVP and is expected to be named to the CIF-SS Division 1 first team.

“She’s a complete all-around player,” Los Altos coach Lydell McCullough said. “She hits the ball in the gap, for power, and that’s what we need in the middle of our lineup. I doubt there are very many complete players around doing what she’s doing against the competition she’s doing it against.”

And in the circle?

In fact, it took a team like Norco, which boasted a starting lineup that featured every single player either signed or committed to Division 1 colleges, to beat Los Altos in the semifinals.

That is also what’s remarkable. Of Los Altos’ three losses, two came to Norco and the other came against Orange Lutheran, another section power.

Los Altos’ 2-0 quarterfinal win over Great Oak may have been Diederich’s signature game. She tossed a shutout against one of the hottest-hitting lineups around.

“I think so,” Diederich said. “The big moments, the challenges, I love it. I want all the eyes on me, I love having all the pressure on me. Give me that situation and I thrive off it.”

And when it was all over, Diederich found something bigger than herself to reflect on.

“I grew up with all these girls,” Diederich said of her teammates. “The legacy we built was so much bigger than us. We  made history. We came here to show everyone who we are, and we’re so proud of each other for what we accomplished.”

Coach of the Year: Lydell McCullough

When Los Altos reached the CIF-SS Division 3 quarterfinals a year ago, Los Altos coach Lydell McCullough figured that 2018 would be the year the Conquerors closed the deal and won a championship for only the second time in school history, because the team returned practically every starter.

And while all that was true, the unthinkable happened when the CIF Southern Section reshuffled its divisions based on parity, putting Los Altos in Division 1, where it would have to take on not just the best in Southern California, but teams ranked in the state and nationally.

But McCullough challenged his team to be bigger and bolder than ever before, and it answered his challenge.

Los Altos not only finished a remarkable 28-3, it went undefeated in the Hacienda League and advanced to the Division 1 semifinals. While it might not have won a championship, advancing to the Final Four on Southern California’s biggest stage — in some ways — was just as satisfying.

For his efforts, McCullough has been selected the San Gabriel Valley Tribune’s 2018 softball coach of the year.

“This season couldn’t have gone any better for me,” McCullough said.  “When you think about the quality of wins and the heights we have reached in terms of rankings, I’m just in awe of this team.”

Los Altos was ranked as high as 15th nationally by one publication before it lost in the CIF-SS semifinals to eventual champion Norco. And in the playoffs, trailing 2-0 against Camarillo going into the bottom of the seventh in the first round, the Conquerors came back to win 4-3 in nine innings.

“To beat perennial Southern California power teams like Pacifica and Mater Dei during the season — both of whom we had to come from behind to win, was unreal,” McCullough recalled. “We won a second straight undefeated league title. And to show our resilience in the playoffs coming back against Camarillo and beating a loaded Great Oak team in the quarterfinals. What more can you say?”

And what made McCullough even more proud is that while most of his players are homegrown neighborhood kids, so is he.

“Honestly, it meant the world to me,” McCullough said of the season. ” I grew up in Hacienda Heights. I went to Los Altos. There’s a lot of pride there. Knowing that these girls have known and competed against each other since there were 6 years old is truly special. The last two years we have had a family environment. You can see all these girls genuinely care and love one another.”