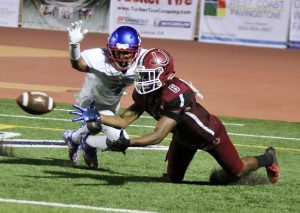 There were many question marks surrounding the 2018 Conqueror Football team heading into the first game since the team was unable to play their scrimmage due to unhealthy air conditions caused by the wildfires.  Most of those questions were answered on Friday as the Conquerors showed the ability to strike fast on offense and come up with big stops on defense.

The Conquerors got on the scoreboard first as Rene Zaldivar capped off a long drive with a 7-yard TD run.  Covina answered back and went ahead 8-6 in the first quarter, but that would be the only time the Colts would lead.  The Conquerors scored 3 more times to go up 28-8 in the second half.  Covina scrapped back and cut the lead to to 8 in the 4th quarter with a chance to tie it up late.  With less than 2 minutes left in the game, Covina faced a 4th and 10 from the 10-yard line.  Covina’s pass attempt was knocked down in the end zone and Los Altos took over on downs and ran the clock out to seal the 35-27 victory.

Junior quarterback Davey Hacegaba had a good night with 172 passing yards, 2 touchdowns and 28 yards rushing.  Running backs Orellius Visaya and Rene Zaldivar each scored touchdowns with Zaldivar leading the team with 92 yards rushing.  The Rodriguez brothers led the team in receiving with Zecheriah Rodriguez catching a 65-yard touchdown and Zedekiah Rodriguez racking up 134 receiving yards and a touchdown. Zedekiah Rodriguez also had a key interception on defense.  The defense came up big when it had too and did a good job of corralling the elusive Covina quarterback.  Antonio Santillan collected 3 sacks on the night, Zaldivar notched 2 sacks and Joel Garcia tallied 13 tackles.  Defensive back JJ Reyes picked off Covina twice and returned one for a touchdown.

The Conquerors host crosstown rival, the Wilson Wildcats on Friday at 7pm in Pat Mauch Stadium.