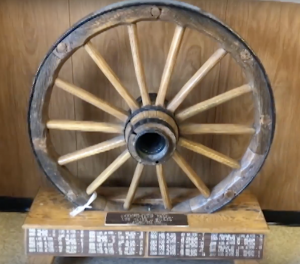 The Conquerors went into Friday’s game with one goal, and that was to dominate their cross town rival, the Wilson Wildcats. Both teams have a rich history against one another but Los Altos had all eyes on the Cats with the Wheel on the line.

Scoring was not a problem for The Conquerors , as Junior QB Davey Hacegaba led the team down the field with an eventual 27-yard touchdown pass to Rene Zaldivar to put the team up 7-0.  “ I was focusing on doing my job as precisely and consistently as I could and just doing whatever I could to leave the field with a win,” said Hacegaba.  Later in the quarter Senior Joel Garcia intercepted a pass and returned it for a 10-yard touchdown which put the team up 13-0.

The Conquerors defense was lights out as they came up big with four interceptions and two goal line stops. This continued for the rest of the night as the team never slowed down in an eventual 35-0 win over the Wilson Wildcats.  Hacegaba added another TD pass to Zedekiah Rodriguez in the 2nd quarter.  The Conqueror offense dominated on the ground and imposed their will on Wilson.  Orellius Visaya and JJ Reyes finished up the scoring with long TD runs.

The team improves to 2-0, and retains the wheel for the seventh straight year.  Despite the teams dominant performance, Senior guard Jordan Porras felt his team could still improve, “We didn’t perform to our fullest but we were able to make the stops we needed and move the ball when needed,” said Porras.

Los Altos has a short week upcoming, as they will face St. Paul on Thursday evening at 7pm.  “Since the game is on a Thursday we lose a day of practice and preparing for St. Paul. We really have to pay attention to the small details and fix the little mistakes,” said Jordan Porras.

St. Paul will be no easy task for Los Altos, as they rallied back from a 13-0 deficit to defeat Division 3 Lompoc. The Swordsmen will be looking for revenge after last seasons loss to the Conquerors.

“Our game plan for next week is to come out with the same mentality as last week which is realizing that we are the better team and having a great week of practice and perform to our highest ability come this Thursday night,” said Hacegaba.