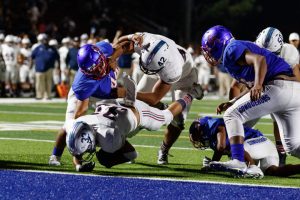 In a game where mistakes can make or break a team, the Conquerors fell on the short side to St Paul, in a game that went into double overtime.

St. Paul came out the gates running as the team took a 7-0 lead. The team capitalized early on two Conqueror turnovers which gave them a 10-0 lead in the first.

Senior Center Isaac Cruz felt the early 10 points were crucial in the Conquerors defeat, “We gave St Paul 10 points in the 1st quarter which hurt us, that’s what went wrong, mistakes on our part.”

Later in the quarter Los Altos’ defense made a huge stop on the goal line, only to be negated when St. Paul’s defense forced a safety, moments later, giving the team a 12-0 lead. Los Altos used a bit of trickery in order to score, as Junior QB Davey Hacegaba pitched the ball to Zedekiah Rodriguez who then threw a 24-yard touchdown pass to  Barry Bozonier which cut the lead 12-7.

Porous special teams play put St. Paul in good field position to add another field goal increasing their score 15-7. With 20 seconds left in the half the Los Altos defense came up big with a strip fumble recovery, which then set up a 12 yard touchdown pass from Hacegaba to Junior receiver Rene Zaldivar as the Conquerors trailed 15-14 at halftime.

Late in the fourth quarter Zaldivar rushed for a  24-yard touchdown putting the Conquerors up 22-15 with 5:59 left in the quarter. Moments later St. Paul’s, Nicholas Loney Jr. returned a kickoff for 74 yards which set up a St Paul touchdown for the tying score.

St. Paul eventually defeated Los Altos in double overtime on a 2-yard run to win the game, improving to 3-0 while the Conquerors fall to 2-1.

Junior Guard Robert Gonzales said, “I believe as a team we kept playing hard all game and kept our heads high all game.”

In what could have been a blow out, St. Paul was not able to capitalize on turnovers which allowed for the Conquerors to make adjustments and rally back.

“We were the unanimous underdog in this game and to send it to double OT was jaw dropping. Our team showed determination and the will to fight,” said Cruz.

The Conquerors will have another tough test as they have a home game against Glendora on Friday, September 7.

“We will improve by having a great week of practice as well as making sure we don’t  get distracted by anything from outside of this team,” said Gonzales.

Click Here for the SGV Tribune article, video and pictures