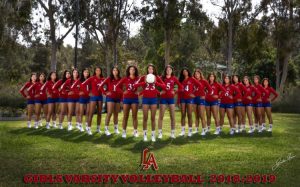 If you haven’t seen the Girls Volleyball team play yet, you’ve missed lots of exciting and spectacular moments! The Conquerors opened the season with a 3 sets to 1 victory against a tough Whittier Christian team followed with sweeps against Northview, cross-town rival Wilson, and Diamond Bar. The team continued with victories over Bishop Amat, Troy, Centennial (Corona) and El Rancho. Overall, the Conqueror’s finished the first half of the season with a 9-4 record.

Hacienda League competition began this past week with Los Altos hosting Diamond Ranch, ranked #8 in Division 5 in the current CIF polls, and Walnut, ranked #4 in Division 6. On Monday, after a slow start and losing set 1, the team rallied and won the next 3 sets 25-23, 25-16, 25-15 earning the victory over Diamond Ranch. On the night, Jada Smith finished with 13 kills, Jenica Hernandez had 10 kills & 3 blocks, Katherine Porter had 8 kills, Sofia Hess finished with 6 kills, 2 blocks & 4 aces, Stephanie Ramos had 23 assists, 12 digs and 5 kills, and Soledad Sibal was solid on defense with 15 digs.

On Wednesday, the Conquerors faced the Mustangs featuring All-league player Michelle Zhao (So). Both teams battled with the Conquerors maintaining just a 1-2 point margin throughout the first set which the Mustangs then tied at 24 where the intensity and excitement soared even greater.  The set reached the apex when Los Altos prevailed at 29-27! Set 2 found Los Altos out to an early lead before Walnut stepped up their effort and finished with a 25-19 win. Walnut continued their momentum into the third set jumping out to an early lead and then gradually expanding the lead to 21-13. With a much needed kill by Jenica Hernandez and the sideout, the floodgates were open for a comeback. Stephanie Ramos served an ace followed by two equally challenging serves leading to errant hit attempts by Walnut forcing them to call a time out at 21-17. Now within striking distance, Sramos served another ace immediately out of the break, followed by another Walnut error, and another ace forcing a second timeout at 21-20. The Conquerors used the momentum to take the lead 22-21 and completed the enormous come-from-behind victory 25-22. The team carried the momentum into the fourth set taking an early lead and continued to control the set expanding their lead and winning 25-16 to secure the victory over Walnut. The stat leaders for the contest include Jada Smith with 15 kills, Sofia Hess hitting with 12 kills & 3 blocks, Katherine Porter 11 kills, Jenica Hernandez with 9 kills  & 2 blocks, Soledad Sibal 16 digs and Stephanie Ramos with 33 assists, 12 digs, and 4 aces.

The Conquerors sit atop the league standings at 2-0, looking to repeat as champions for the 7th consecutive season. Next up, the Conquerors travel to Charter Oak on Monday, September 17th and host South Hills on Wednesday, September 19th. The complete scheduled and complete season stats are posted on Maxpreps. Come and see them play often!