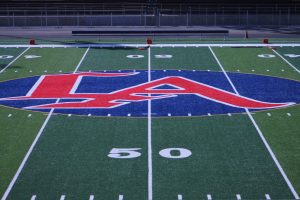 The Los Altos Varsity football team has hit a rough patch early on in the season, but no faith has been lost in the young group as they have shown glimpses of greatness throughout the year.

The Conquerors have lost the last three games, but are in no need to panic because it has come against some of the top ranked schools in the valley. Two of those games were heart breakers, but the team has a cleared mindset and are preparing themselves for a tough Hacienda League.

Senior Captain Jordan Porras said, “The team’s goal is to buy in fully. Once everyone is on the same page and ready to work we can finally start to get better as a whole.”

The Hacienda League will be a battle between Los Altos and 5 other schools including Charter Oak, South Hills, Diamond Ranch, Walnut, and West Covina.  The Conquerors are predicted to be one of the top teams to take league this year along with South Hills (4-0) and Diamond Ranch (3-2).

Great spirits and hard work have the Conquerors rejuvenated and ready to compete the rest of the season. Head Coach Travis Brown emphasized in a team meeting with the young men that discipline, determination, and buying in will be a huge concept that the players must adhere to if they want to be successful.

Junior Captain Rene Zaldivar said, “This bye week is very much needed and could not have come at a better time. We’re going to work on the basics and go from there. The talent on this team is remarkable and I’m stoked to go into league with this team.”

The team has participated in team workouts, and have watched film to become better players. The team had a lot of energy and were flying around in practice, which was liked by both players and coaches. The Conquerors participated in drills which helped them individually and rally around one another as a team.

Porras said, “This team is full of young talent that needs to come out, we will focus on improving at practice by being fully focused on our jobs.”

Los Altos will open up league play at home against Diamond Ranch on September 28, 2018.  The Conquerors will take on each game one at a time in order to reach the goals they have set for the rest of the season.

“During the season thus far, we have used the excuse that we are a young team and we have a lot of players without any varsity experience. But that shouldn’t be an excuse anymore. Obviously, this year isn’t going the way we would have liked it to, but after a long team meeting with Coach Brown I believe that he opened our eyes for what is next, and I honestly feel  that he flipped a switch on this team,” said Junior Captain Davey Hacegaba.