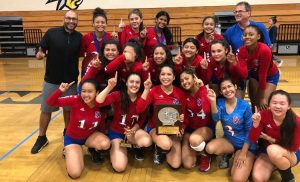 Stepping into the maroon, gold and white colored gym of West Covina High School with their heads held high, the Los Altos Girls Varsity Volleyball team made their presence known as they prepared to beat the West Covina Bulldogs.

The 5th league game, also the last of the first round games, took place on Monday, September 17th at 5:30 p.m.  The Lady Conquerors came in with a winning mindset and made sure to stay focused on their main game plan.

The girls had already had a set strategy to win, however when West Covina’s big middle came out of the game in the second set due to an injury, the LAHS girls had an open window.

Senior Setter Stephanie Ramos said, “My team and I were able to run different, dynamic plays that were effective. Our middles were a big part of our offense game, so the plays were purposely modified to create one-on-one opportunities for them.”

The Lady Conquerors used their strong Outside Hitters and disciplined back row defense to take the first two sets from the Bulldogs easily, starting the game 2 sets to none.

It did not take long for the WCHS girls to understand what they’re up against, and soon they began to fight back with their strong outside and back row attack. The Bulldogs took the third set from our Lady Conquerors, and immediately the inner Conquerors came out of the LAHS girls.

Ramos said,”After losing one of the sets, we reminded each other of our individual and team goal, and as a team, we worked together to pick each other up to develop a confident atmosphere. Our desire to win League Champs once again kept us fighting.”

Senior Opposite Jennifer Martinez said, “Being undefeated does set higher standards for the team, and we will never settle for anything less. We know our capabilities and always bring it to the court.”

In addition to the Conquerors taking care of business in the first round of league, they won the Gabrielino Tournament over the weekend going undefeated in four games.  They followed up their flawless performance over the weekend with a 3-0 win over Walnut on Monday to take control of the Hacienda League.  The team is 19-5 overall and 6-1 in league with 3 league games to play.  The girls are at home on Wednesday against Charter Oak, at South Hills on Monday and finish off the year at home next Wednesday against West Covina. 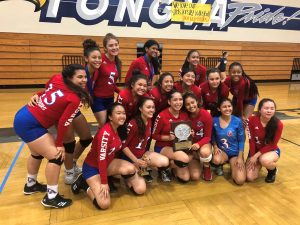 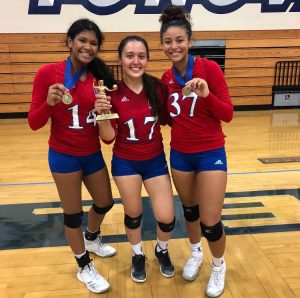