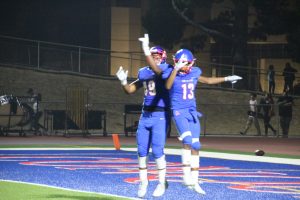 The last 4 games have not been pretty for the Conquerors, whether it was close losses or a game that got out of reach.  However, in week 7 the team was focused and dominated on all cylinders in Friday nights win over the Walnut Mustangs.

Both teams went into the game with aspirations of winning their first league game of the year, with the Conquerors being 2-4 (0–1) and the Mustangs 4-2(0-1).

Los Altos struck first as junior running back Rene Zaldivar hit the outside lane for a 62-yard touchdown run which put the Conquerors up 7-0.

Sophomore defensive back Zedekiah Rodriguez said, “The team was feeling confident after the first touchdown, and we knew we can score more.”

The Mustangs put together a drive leading them all the way to the ten, with an impressive rushing attack, only to be negated by a fumble recovered by senior linebacker Joel Garcia.  The Conquerors then drove down the field and executed on a pass from Junior quarterback Davey Hacegaba as he found Rodriguez in the seam for a 49-yard touchdown increasing the lead to 14-0.

The Mustangs crowded back field allowed for one of their backs to slip free for a 25-yard touchdown pass which trimmed the lead 14-7 late in the second quarter. Though this would be Walnuts first and final score. Rodriguez commented, “The game plan going into the night was, if everyone does there assignment,  we will all go out with a dub.”

Los Altos forced turnovers and scored touchdown after touchdown en route to their 41-7 victory over the Mustangs.

Senior left tackle Manuel Lona said, “preparation for Walnut was not any different from the others.  It was just in tonight’s game where we executed our game plan properly which led to success.”

Los Altos will enjoy this victory, but get back to work in order to prepare for a tough match up against Charter Oak High School.  Lona said, “We will prepare for Charter Oak the same way we have prepared for every other team, but focus on their strengths in order to come out with a win.” The two teams have developed a rivalry with one another as over the years they have impacted one another’s league title as well as playoff chances.

The Conquerors plan to take each game one at a time and will face Charter Oak Friday, October 12 at 7pm.