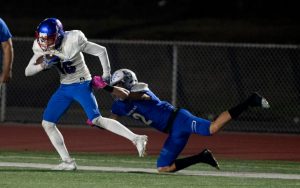 Defense, intensity and a spark of offense contributed to the Conquerors league win over the Charter Oak Chargers on Friday October 12th and Saturday the 13th. The game carried over from Friday to Saturday do to lighting storms.

The Conqueror versus Charger rivalry is something that means a lot to both communities. Both schools are respected in their football accomplishments and usually draw in the top talent throughout the area. They have faced one another in the championship game in addition to being a part of ruining one another’s league title hopes. This game had playoff implications on the line and the Conquerors kept their hopes alive with a victory over the Chargers.

Senior line backer Anthony Licea said, “It felt like the best win of the season. We lost two of our brothers that game so we wanted to win for them that game the second day.”

In the first half the Conquerors defense came out strong. The team intercepted the ball twice and have five stops defensively. The team allowed 0 points but the offense struggled. The team could not connect or get a push off the line. The lightning storm caused the game to be postponed until Saturday in which both teams resumed the second half with a 0-0 score.

Junior running back Rene Zaldivar was injured in Friday nights contest as he injured his rib on a unfortunate hit. Zaldivar is fine and will be held out until medically cleared.

Senior guard Isaac Cruz said, “Our mindset going into the game was to give everything we got every play for each other.”

The second half resumed on a cold Saturday with an empty stadium. The Conquerors opened up the game with a 69-yard back shoulder fade from junior quarterback  Davey Hacegaba to Junior Barry Bozonier, which gave the Conquerors a 7-0 lead. Shortly after kickoff, a fumble was recovered by senior linebacker Anthony Licea which set the Conquerors up at the Charter Oak 20. Junior running back Orellius Visaya was able to finish the drive with a touchdown run, putting the Conquerors up 14-0.

Visaya scored once more for the Conquerors which gave them a commanding 21-0 lead. The Chargers returned the ensuing kickoff for a 70-yard touchdown but a block in the back penalty negated the touchdown. Charter Oak managed to score one touchdown in their 7-21 loss to the Conquerors.

Cruz said, “ it was a great team win. We all came together as one in the second half. The first half on Friday had every one feeling emotional, but we cleared our heads Saturday night and finished as a team.”

Los Altos takes home the bragging rights after their 21-7 thrashing of the Chargers. The Conquerors will play for a chance to win a league championship at home vs South Hills for Senior night on October 19, 2018.

Licea said, “We will practice very hard and get ready to stop them every drive. They are a tough team but I feel with good preparation we will be ready to go Friday night.”