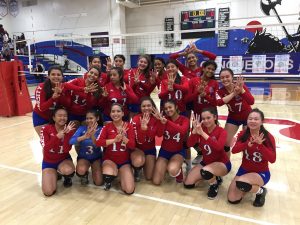 Last week, the Los Altos Girls Volleyball team capped of another amazing season with their seventh straight Hacienda League Championship.  The Lady Conquerors finished the regular season 25-5 overall and 9-1 in league. The team is playing its best volleyball of the season as they have won 17 of their last 18 contests.

Freshmen Kathy Porter leads all hitters with 234 kills and Jada Smith has 203 despite missing the last week of the season nursing an injury.  Juniors Jenica Hernandez and Sofia Hess lead the team in hitting percentage (.290) and blocks, 51 for Hess and 41 for Hernandez.  Senior captain Stephanie Ramos leads the team with 59 aces and 476 assists and is second on the team with 205 digs.  Libero Soledad Sibal leads the team with 409 digs.

In the final CIF poll, Los Altos was ranked #9 in Division 5 while MaxPreps has the team up ranked in the top 5 of the division. The Lady Conquerors are 5-1 against ranked teams this year and will face Pacifica from Garden Grove in the first round of CIF Division 5 action on Thursday night.  Pacifica is 23-9 overall and finished in second place in the Empire League.  If the Lady Conquerors emerge victorious, they will take on the Calvary Chapel/Whittier Christian winner.  The team has already faced Whittier Christian twice this season going 1-1.

The game is set for a 6pm start time in the Los Altos Gym.  Tickets are $10 for Adults and $5 for students with student ID and children ages 5-13. 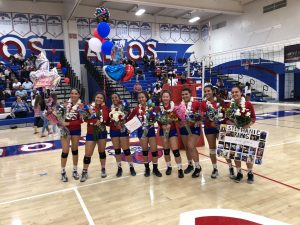