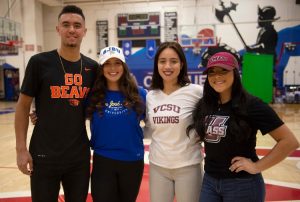 Today, four Conquerors signed their National Letters of Intent to universities throughout the country.  3 Softball players inked their names on the line and 1 member of the Basketball team.  Jocylyn Vidal, Shyanne Sanchez and Samantha Torres represented the Softball program while Jarod Lucas made his signing to Oregon State official. 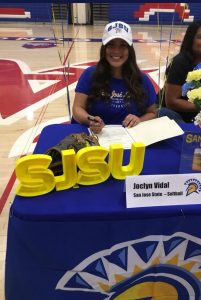 Next year Jocylyn Vidal will be taking her slick fielding skills and powerful bat up the coast to San Jose State University. The 1st Team All-League and 1st Team All-SGV selection last year weighed her options this summer and decided to become a Spartan.  Last year Vidal hit .452 with 9 doubles, 3 home runs and 23 RBI.  This season, Jocylyn will continue to be a presence in the middle of the Conqueror lineup and the 4-year starter will be leaned upon to lead the team. 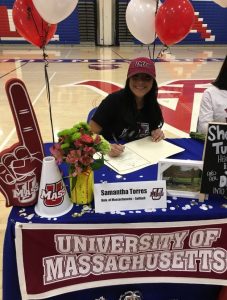 Samantha Torres has decided to move across the country to attend the University of Massachusetts in Amherst.  This decision was made over the summer and is one that Samantha is excited about.  In her limited opportunities last year, Torres came through hitting .429.  She will see an expanded role on the team this season and is expected to be a strong contributor. 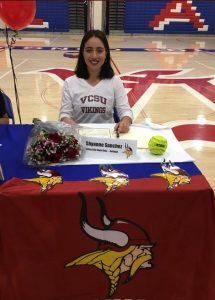 Shyanne Sanchez will see a change of scenery next fall as she will be attending Valley City State University in Valley City, North Dakota.  Last season, Sanchez hit over .500 in her limited role but she is expected to play a larger role on the 2019 squad. 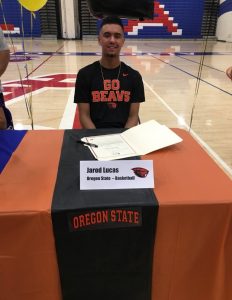 Jarod Lucas is one of the most celebrated student-athletes in the long history of Los Altos High School. In his first 3 years he has become the programs all-time leading scorer and is at the top of the record books in many other categories. With offers on the table from several Division 1 schools including Santa Clara, Nevada, Tulsa, and UNLV, the 3-time Hacienda League MVP, 3-time All-CIF selection and last year’s Valley Player of the Year has decided to stay on the west coast and attend Oregon State University.

Lucas commented on his decision saying: “I know that there are only a select amount of basketball players that get to achieve the dream of playing Division 1 basketball, and it especially means a lot to sign in the gym that I have grown up in,” Lucas said at Wednesday’s ceremony. “It also feels great to sign knowing that I stayed home and played for my hometown, and it’s crazy, but my dad was the last basketball player to get a Division 1 basketball scholarship at Los Altos.”

Lucas’ dad, Jeff Lucas, is also the Conquerors’ head coach. At Oregon State, coach Wayne Tinkle coaches his son. “I couldn’t see a better fit,” Lucas said. “Coach Finkle and (his assistant) both coach their own sons, and having a smooth transition from high school to college is important to me. With my dad coaching me almost all my life I wanted a similar situation.”