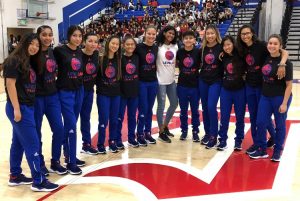 With winter fast approaching, students of Los Altos are getting ready for chilly days, Christmas, and the upcoming girls’ varsity basketball season.

The girls have been anticipating this season to be another fun, thrilling ride. Since summer the team has been working with each other and adjusting to new freshmen along with some transfer students.

The coaches  have been working with the girls in the weight room, on the track, and of course, in the gym.

Coach Danny Rodriguez said, “We are working on being more physical to force other teams to look for other alternative, more complex ways to score. It is our job to make it difficult for them.”

The girls work hard in the gym working on both offense and defense, preparing them for preseason, season, and possibly CIF. Last year the girls were defeated by Redondo Union by just 3 points in the third round of CIF, and ever since they have been working to get back to that high shelf.

Senior captain Kiara Moreno said, “This year we are really focusing on communication skills and being more vocal, that way we help each other be loud.”

The team this year have certain teams in their minds that they want to beat, even more than last year if possible, such as Walnut, Diamond Ranch, and even Redondo if they had the chance to do so.

The girls also work on speed and agility both on and off the court. When they get the chance to, the Lady Conquerors take their time learning and perfecting plays, whether they’ve used them for a few years or for the first time this year. They also test their speed out on the track, making themselves quicker for the upcoming competition.

Rodriguez said, “We need to make it easier for us to score the ball faster and more efficiently. These plays and speed training help with pushing the team and setting higher bars for themselves.”

The girls are working to eventually start their season towards the ending of November, but in the meantime, their training keep pushing themselves, and the girls go to work every day with one goal in their mind: to win.

The Varsity season gets started today as the girls travel to Torrance for their season opener before taking part in the very competitive Mustang Classic at Eastvale Roosevelt next week.