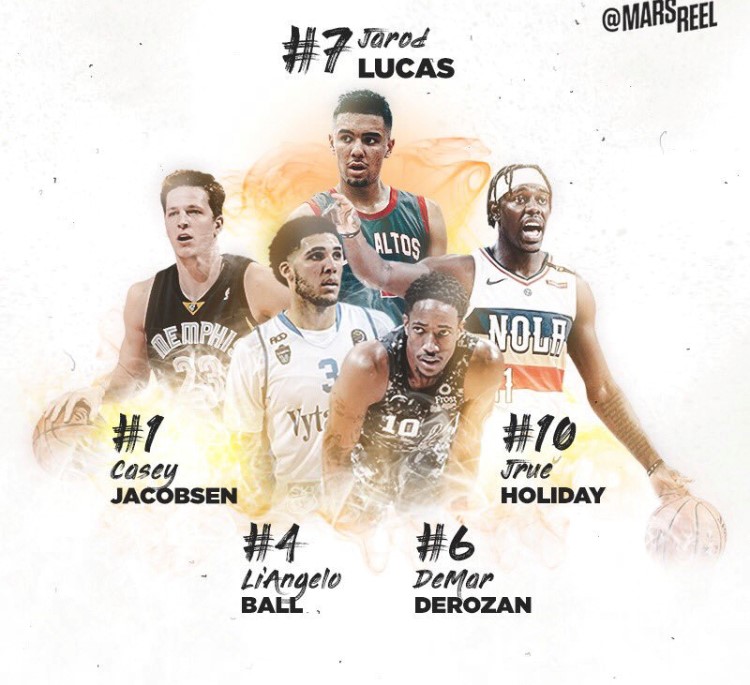 Jarod Lucas, a senior at Los Altos High School in Southern California, is closing in on some big names on the CIF Southern Section all-time scoring list.

Lucas is currently averaging 36 points per game, which helped him climb into the Top 10 and past Pelicans point guard Jrue Holiday. After dropping 75 points in two days at the Damien Classic, Lucas is up to 2,723 career points, putting him at No. 7 on the list.

With 13 remaining games plus the postseason, Lucas is now eyeing the No. 6 spot and beyond. Occupying that No. 6 position is none other than 4-time NBA All-Star DeMar DeRozan.

“It’s really a blessing,” Lucas told Mars Reel. “I really couldn’t do it without my teammates. It means a lot passing up guys. And you know a guy like DeMar DeRozan is No. 6, which makes me feel like it’s a big accomplishment.”

The 6-foot-2 combo guard is ranked No. 226 by the 247Sports Composite Rankings, which feels pretty low for a player posting numbers like this. Lucas was recruited by just one program within a power-five conference, Oregon State, where he later signed his letter of intent.

“I for sure think I’ve been overlooked. But playing in Southern California, that tends to happen with the hotbed of talent out here,” Lucas said. “I’m really looking forward to getting up to Oregon State.”

Lucas credits his experience with the Compton Magic as one of the primary reasons for his success this season. The Magic captured the Adidas Gauntlet title and defeated the Nike EYBL Peach Jam Champions, Team Takeover (D.C.), to conclude a 46-2 season.

While playing with such a talented team, Lucas focused on mastering his role.

“It was a big learning lesson playing on a team like that,” Lucas said. “Even when I was playing in my previous years of AAU on the Compton Magic, I was told ‘Hey Jarod go score the ball’… With this year, I had to learn how to excel in my role and be efficient with my shot. I learned how to play smart, be efficient and just try to make the right play.”

That learning experience is certainly paying dividends at Los Altos. Now as the focal point of his team’s offense, Lucas is finding the right balance between being aggressive and playing smart.

With the season at its halfway point, Lucas is hoping to finish strong by advancing in the postseason and moving up the CIF Southern Section scoring list. The record holder is former McDonald’s All-American and four-year NBA veteran Casey Jacobsen at 3,284 points.

For his efforts on the court last week, Cal-Hi Sports Southern California has named Jarod Lucas the Boys Basketball Player of the Week

We’ve been following Jarod since his freshman season playing for his father, Jeff, the head coach at Los Altos so it wasn’t surprising to see a lot of buzz on social media in recent days about him moving to “No. 7 on the California all-time scoring list.”

Despite his amazing season so far, that didn’t seem correct so we had to check it out. Lucas actually started this week at No. 16 on the all-time state career list, which is still quite high and will only get higher, especially the way that Jarod is scoring this season.

Lucas’ stats aren’t getting put up into MaxPreps this season, but they are being posted from other sources and show him with an average of more than 37 ppg. At last weekend’s Take Flight Challenge at Redondo High, Lucas pumped in 42 points with 10 rebounds and six assists to lead the 14-5 Conquerors past Leuzinger of Lawndale, 86-80. Before that, he had 39 points as Los Altos swamped its rivals from Hacienda Heights Wilson 93-67.

With 2,804 points for his four years and counting at the beginning of this week, Lucas only needs seven points in his next game to surpass DeMar DeRozan of Compton on the Cal-Hi Sports all-time state list. DeRozan, now an NBA superstar with the San Antonio Spurs, scored 2,810 points from 2005 to 2008 for the Tarbabes. That would move up Lucas into the top 15 in California history. The state record of 3,462 points was set in 2004 by DeMarcus Nelson from Sheldon of Sacramento (who also played at Vallejo).

Lucas, who has signed with Oregon State, is the highest among several other in the state this season who are moving up the career scoring charts. The other two highest would be Jaime Jaquez of Camarillo and Joseph Octave of San Pedro Mary Star. Jaquez starts this week with more than 2,300 career points. Octave has 2,415.