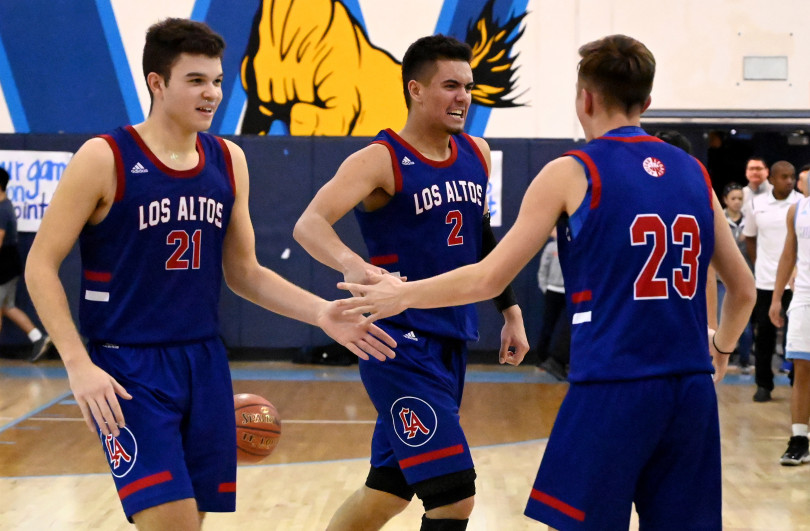 In an effort that left practically everyone speechless and exhausted afterward, the Los Altos high school boys basketball team pulled out a wild 77-72 double overtime victory over Walnut on Wednesday to seize control of the Hacienda League and close in on its fourth straight league title.

Walnut had all the chances it could ask for, and nearly won in regulation when Eli Ramos missed a 12-footer at the buzzer to send the game to overtime, tied 56-56.

In the first overtime, Los Altos’ Jarod Lucas, who finished with a game-high 53 points to continue his chase at the CIF Southern Section all-time scoring record, drained a big 3-pointer for a 64-61 lead and the Conquerors’ led 66-63 with a couple seconds left.

After Los Altos missed two free throws that would have sealed the deal, it still appeared Walnut had virtually no chance taking the ball out under its own basket with 3.7 seconds left.

But Walnut whipped the ball down the court with two quick passes to Isa Al Juraishi, who buried a corner three as time expired to send the game to double overtime.

“It was a great atmosphere, we had a couple mistakes toward the end, especially me, not locking in on (Al Juraishi) to let him hit the three to send it to double overtime,” Lucas said. “But games like this are what we need to make a run in the playoffs.”

After Walnut’s Shaunte Castaneda scored with 54 seconds left to give the Mustangs a 72-68 lead in the second overtime, it looked like they would finish their improbable comeback.

But Los Altos’ Isaiah Barcelo, who finished with 14 points, chased down an offensive board and scored to make it a two-point game.

After a Mustangs missed shot, Lucas grabbed the rebound and went the length of the floor and attacked the basket, scoring and drawing a foul. He made the free throw to finish the 3-point play for a 73-72 lead with 19 seconds left.

Walnut missed its shot to go back in front and Lucas grabbed the rebound and hit free throws down the stretch to close it out.

“My teammates did a really good job and we locked in that last 55 seconds,” Lucas said. “I feel like there was a switch that kind of hit us, where wow, we could lose our four-peat. But we turned our switch on and turned it into a W.”

Los Altos (19-5, 7-0) won its 11th straight and virtually locked up the league title, needing only a win in its last three games to close it out and get ready for the Division 1 playoffs.

“That was definitely one of the wildest, craziest best games to come out on top,” Los Altos coach Jeff Lucas said. “It was unbelievable. I’m kind of speechless because I thought we had the game won it seemed like. But they got that three off (in overtime to tie the score) and we were down four in the second overtime with less than a minute. But we’ll take the win and that two-game lead in league.”

For Walnut (18-7, 5-2), it was a tough pill to swallow because a share of the league title was within its grasp.

Walnut’s Eli Ramos finished with 20 points and 13 rebounds, but fouled out in the first overtime. Caleb Santos was clutch too, finishing with 16 points and 12 rebounds and Micahel Hoffmeir had 12 points and 10 boards.

“I’m proud of my guys,” Walnut coach Joe Khouzam said. “They played hard and we got down a couple times, but we found ways to get back in it.

“Los Altos is a really good team but our guys stepped up and Isa hit that big three when Caleb found him in the corner in overtime.”

Khouzam said he wish they defended better on Lucas’ 3-point play with 19 seconds left that turned a two-point lead into a one-point deficit.

“He’s a D1 guy, and he did what D1 guys do,” Khouzam said of Lucas. “He’s been a champion for a while. He got to the rim and we wouldn’t take a charge and if you don’t take charges against him you’re in trouble.”

Lucas, an Oregon State commit, moved to fourth on the CIF-SS all-time scoring last after moving past Glendora legend Tracy Murray on Monday.

With his 53 points on Wednesday, he pushed his career scoring total to 3,107 points.

Whether Lucas becomes the all-time leader may depend on how long the Conquerors survive in the Division 1 playoffs that are a couple weeks away.

Link to Los Altos vs West Covina, Lucas gets 3,000 Points