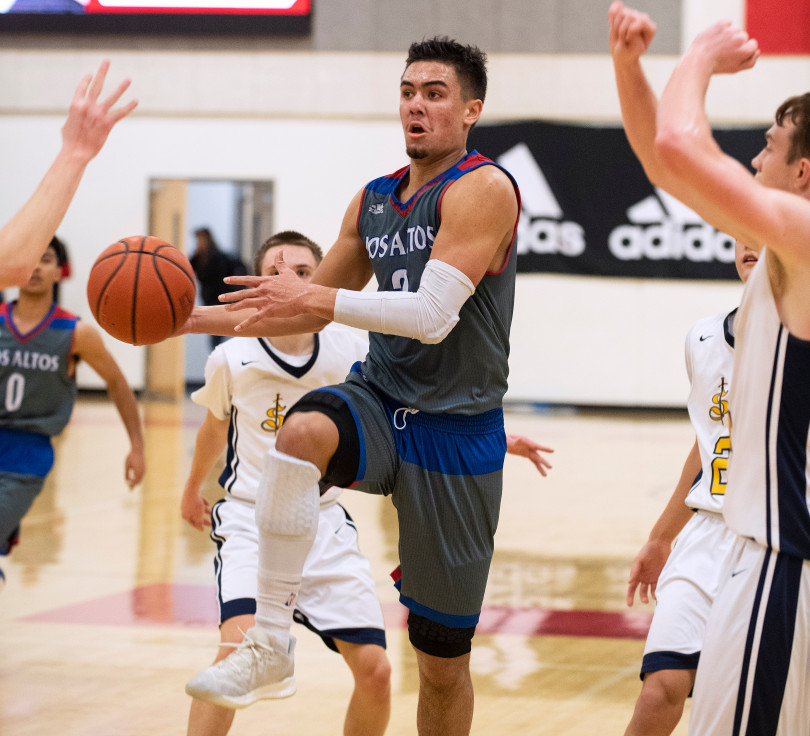 Charter Oak gave the Conquerors a run for their money in the first quarter but Jarod Lucas and company figured it, out dominating the rest of the way winning  97-45.  The win improves the Conquerors record to 20-5 and 8-0 in the Hacienda League.

Conqueror Students packed the gym for their own version of “The Silent Night Game” which originated from Taylor University. For those who do not know of the tradition, students and spectators dress up Halloween-style or school spirited and prepare to cause mayhem when the home team scores its 10th point.

Los Altos came into the game in first place in the Hacienda League while Charter Oak is dead last.  Nobody expected Charter Oak to compete but they played aggressive in the first quarter and connected on many threes.

Eric Stover hit a couple threes early for the Chargers while Jay Gonzales and Noah Gaitman contributed points of their own. Senior guard Matthew Barrera hit the first few buckets for the Conquerors as he effectively drove threw the defense for a contested layup.

It was only a matter of time before Lucas started to get going, and he had the hot hand early as he hit his first two free-throws and drained two threes shortly after. Dion Porter capped off the Conquerors 10-2 run ending the first quarter with a 30-20 lead.

Although Lucas was hitting his shots early Charter Oak was aggressively attacking him full court and hacking away at him with no fouls being called. Many no calls had Coach Lucas and parents upset with how the game was officiated but this did not bother Jarod as he finished the half with 26 points. Charter Oak’s double teaming allowed for Los Altos to take advantage of their defense and go on a 16-0 run.

Lucas said, “I think the big thing for me was avoiding not getting a technical, and I didn’t get a T but these dudes were physical and I have started to become accustomed to it, but tonight that officiating was something else.”

Lucas capped off the half hitting two free-throws which gave the Conquerors a 58-32 lead going into halftime. Jarod had 25 points at half while Dion Porter added 10 of his own.

A lot of calls were missed by the refs but this did not phase the Conquerors, as they continued to be aggressive on the drive and shoot the three ball consistently. Lucas finished the night with 36 points, and is now at 3,143  ranked number 4 on the All-Time Southern Section Scoring list. Jarod still trails Casey Jacobsen, Aaron Holiday, and Taylor King for the all time spot.

“The big thing for us is we locked in on defense, the last couple of games we didn’t do too much of a good job, but especially in games like this playing against a team that’s last place in our league, it’s hard to lock in but we did a good job,”said Lucas.

Eric Stover led the way for the Chargers with 13 points, but it was not enough as Charter Oak falls to 7-20 and will finish off the season with two games against South Hills and Walnut.

Porter commented about the teams confidence going into tomorrow’s game, “Just stay humbled and have our mind right we need to stay focused and be active. Tomorrow is a big defensive game, we don’t know much about Alamitos but we know they’re a defensive team.”

Los Altos controls their own destiny and will win league outright with two games left to go against South Hills and West Covina. The Conquerors would be crowned Hacienda League Champs and secure its’ fourth straight league title with a win over South Hills on Tuesday. The Conquerors will face off against Los Alamitos Saturday morning at 9:45am in the Nike Extravaganza.

The Conquerors defeated Los Alamitos in Saturday’s Nike Extravaganza.  The win improves the team’s record to 21-5 on the season with 2 games to play in the regular season.  Jarod Lucas once again led the way with 41 points and 16 rebounds and is now 100 points behind Casey Jacobson for the all-time CIF-SS scoring title.  Three other Conquerors had double-digit scoring days as Mathew Barrera had 14, Dion Porter scored 12, Isaiah Barcelo chipped in 10 and Christian Cavanias played well in the paint with 6 points and 6 rebounds.