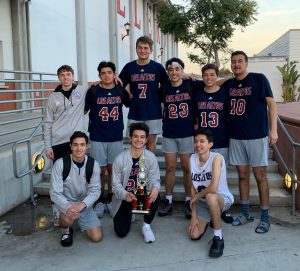 The Los Altos Boys Volleyball team has started the 2019 season strong and look like they will be a force to be reckoned with in CIF Division 4.  The boys are 9-3 so far this season and have looked strong against good competition.  The team finished 2nd in the Tustin Tournament, going 4-1, with the only loss coming in the championship match.

The squad is ranked #4 in CIF Division 4 and has received a major boost from Freshman Jordan Lucas.  Lucas leads the team with 77 kills and a 317% hitting percentage. Other key contributors are Jackson Esquivel with 75 kills, Chris Kissling with 238 assists and Eddie Villanueva leading the team with 71 digs.

The Conquerors host Diamond Ranch on Thursday, the first of what will be many tough match-ups in a very competitive Hacienda League.  The Conquerors just missed out on making the playoffs last season but look to turn their fortunes around this season.