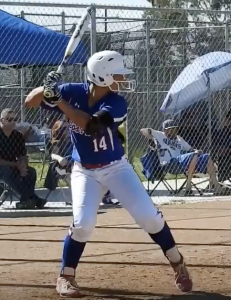 The Lady Conqueror Softball team has battled inconsistency this season as they have struggled to put teams away in the late innings.  One thing that the team can count on though, is that runs will be produced.  The team is averaging 7.5 runs per game through their first ten games and have scored 9 or more runs in their last 5 games.

The struggle to put teams away late was not a problem on Wednesday against crosstown rival Wilson.  The Conquerors fell behind early and trailed Wilson 5-0 going into the later innings.  The Lady Conquerors chipped away at the lead eventually tying the score in the 6th inning.  Wilson threatened to take the lead in the 7th but Jocylyn Vidal was able to work her way out of the jam with a huge double play to get out of the inning.  That set the stage for Junior Mikayla Ceballos who led the inning off with a blast to centerfield that cleared the fence by plenty and the celebration was on.  The win put the teams record at 5-4-1 overall as they prepare for the first round of league games.  The girls will open up league play on Friday at Walnut.