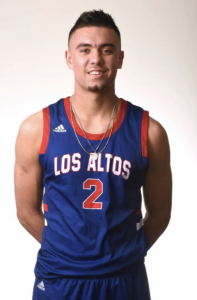 Los Altos High School’s Jarod Lucas will be remembered in the San Gabriel Valley forever after delivering a record for the ages, becoming the CIF Southern Section’s all-time leading scorer, a record he broke in the final league game of the regular season by scoring 52 points in a win over West Covina to pass Glendora’s Casey Jacobsen to set the all-time mark.

When it was all over, Lucas finished with a CIF-SS record of 3,356 career points, which is third all-time in California history.

Lucas, a senior who has signed to play college basketball at Oregon State, did it by averaging 40 points points per game this season, which led California in scoring and was third in the nation, according to MaxPreps.

Lucas also averaged 11.4 rebounds and 4.4 assists, made 133 3-pointers and shot 89 percent from the foul line. He helped Los Altos finish 24-6 overall and go undefeated in the Hacienda League, giving the Conquerors their fourth straight league title.

And he got to do it all while playing for his father, Jeff Lucas, who is also Los Altos’ head coach.

“It was a great experience,” Jarod Lucas said. “Especially fun being with my dad on the sidelines. I couldn’t of done it without my family and especially my teammates, too.

“Overall, it’s something that a lot of kids dream of doing, but to do it in front of your hometown, to average 40 points a game and win our fourth straight league championship, it was awesome.”

Los Altos was so good the past four years that it vaulted all the way to Division 1, where it got to the second round this past season before losing to Damien.

“There’s definitely a lot of pride in that,” Lucas said of helping Los Altos rise in in the CIF-SS divisions.” We were a Division 3 program my freshman year, and made it to Division 1 and made it to the second round. We lost, but I still got four league championships.”

Lucas went into the final week of the regular season needing 100 points to tie the record, and got there with two incredible performances despite the opposing teams double-teaming, trapping and doing anything they could to stop him from scoring.

They weren’t successful. After his 52 points over West Covina in the league finale at Los Altos, the school retired his jersey in a ceremony afterward.