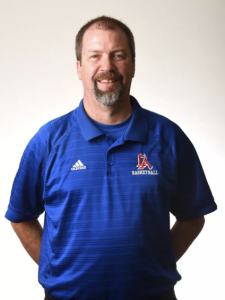 Los Altos boys basketball coach Jeff Lucas had the difficult challenge of trying to balance coaching his son, who was chasing the CIF-SS career scoring record, while also making sure to get the most out of his Conquerors team, which he did in leading them to a fourth straight Hacienda League title.

Lucas has been one of the most consistent winners in the San Gabriel Valley for more than two decades, and guiding the Conquerors to a 24-6 overall record and taking his program to the second round of the CIF-SS Division 1 playoffs was further proof that he got the most out of his neighborhood-school roster, and he did it while his son became the all-time scoring champ.

For his efforts, Lucas has been named the San Gabriel Valley Tribune coach of the year for the first time.

“It ended up being a special season,” Lucas said. “It was a little slow in the beginning, losing a few games because we had a tough schedule. But then we had a 16-game winning streak and took that streak into the CIF playoffs at beat Crossroads in the first round, a team that took us out of the playoffs last year.

“When you think about a storybook season for Los Altos and me and Jarod, you couldn’t ask for much more. We would have liked to have gone further in the playoffs, but Division 1 was tough and I think we really competed well. Going from Division 3AA four years ago to Division 1, it’s a sense of pride. You wish you were in a division that could have given your team a better shot at a title, but you have to be proud of your team for trying their best.”

Over the last four years, Los Altos went 94-20 overall and 37-3 in the Hacienda League, which is the best four-year stretch in Los Altos history. It was also the school’s fifth straight 20-win season.