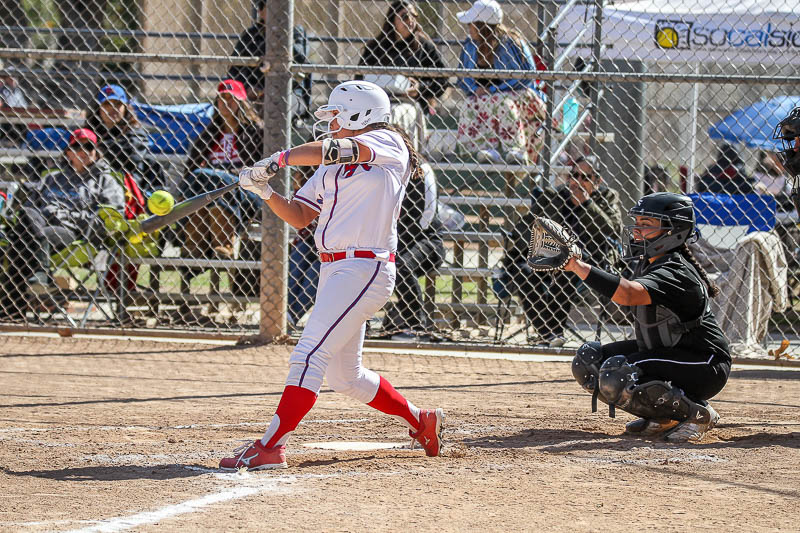 After receiving a 10-run thumping against Walnut a week ago, the Los Altos High softball team had all the motivation it needed going into the second meeting with the Mustangs on Friday.

This time, the Conquerors (6-5-1, 1-1) hosted surging Walnut (8-6, 1-2), which went winless against Hacienda League opponents a year ago. And this time, Los Altos got the last laugh.

“I’m not going to lie, we were highly motivated,” Conquerors coach Lydell McCullough said of the team’s mindset going into Friday’s rematch. “They took it to us, give them credit. But I’m really proud of my team for bouncing back. We really played an all-around game.”

Vidal, who will play for San Jose State next year, said she had a new plan for how to approach Walnut starting pitcher Daniella Leon. The freshman right-hander likes to get ahead early in the count, and in Vidal’s first plate appearance Friday, in the first with a runner on, the Los Altos captain was ready for that first-pitch strike.

She gave the Conquerors a quick 2-0 lead by slamming the first pitch she saw over the right-center field fence.

“Last time I faced her she tried to get on top of the count,” Vidal said. “I saw that one and I banged it. It felt really good to jump on top and bring the energy up for the team in the beginning of the game.”

Things didn’t get better for Leon in the second. She struggled to find her spots, walking the first three Los Altos hitters she faced in the inning. After striking out Conqueror catcher Laila Arditto, Leon allowed the third run to score off an infield single from Vidal.

Another run scored when Mustang catcher Clarissa Ortega’s throw to first on a 5-2-3 double-play attempt went into right field, giving Los Altos a 4-0 lead going into the top of the third inning.

“She’s been struggling a little bit with hitting her spots and we know that,” Walnut second-year coach Nicole Neeley said. “It’s a learning process. She’s young, she’s a freshman and both of my pitchers are freshmen. They have to understand that some of these girls are 17- and 18-year-olds who have been playing varsity for years and they’re going to take advantage of that.”

On the other end, Los Altos was throwing its star freshman out to the circle, who looked nothing like a lower classman. After falling behind 3-0 in the count to start the game against the Mustangs’ Bailey Rivas, Bohorquez got back in the count and eventually struck out the senior on the 11th pitch of the at-bat. Bohorquez retired the next five Walnut hitters she faced.

“She’s had her ups and downs this year,” McCullough said. “She’s a freshman, she’s still learning how to pitch and to stay in the moment and she did a good job of hitting her spots. We saw some growth right there. I want to continue to see her grow as the season goes along.”

Bohorquez, though, ran into some trouble in the top of the third inning. She gave up a leadoff double to Rivas, then a single to center field to freshman Ella Soltero to put two runners on with no outs.

However, Bohorquez, who finished the game with three strikeouts while allowing four hits and one walk, got out of the inning unscathed, getting junior Alexia Chavez to pop up, then forced consecutive groundouts to Vidal, who ultimately helped the Conquerors close the door on the Mustangs’ one true threat of the game with her reliable glove at third base.

“I was trying to back up our pitcher,” Vidal said. “She’s a freshman so her confidence level is up and down. So making those plays for her really brought her confidence up.”

In the bottom half of the third, the Conquerors essentially put the game away. Leon walked a trio of Los Altos batters, then allowed a run to score on a one-out walk.

The three-time defending league champs added another run off a Ardotti single, then a pair off a base hit by Vidal, which extended the team’s lead to 8-0 going into the fourth inning.

Senior Haley Jacobo drove in a run in the bottom of the sixth with a two-out double.

Freshman Marly Manalo finished the game in relief, allowing one run and one walk in 2 2/3 innings.