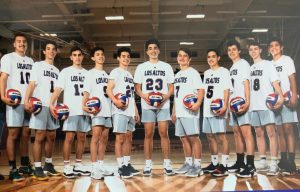 The 2019 Boys Volleyball Team has been a dominant force in the area as they finished the regular season with a 24-4 overall record and an undefeated 8-0 league record.  After just missing the playoffs last year, this years squad has bounced back with a vengeance as they did not lose a single set in league play en route to capturing the Hacienda League title. In fact, the team has only lost 14 sets all season. That dominance has earned the group a #3 overall seed in the CIF Division 4 playoffs.

The road to a CIF Title begins on Tuesday as the Conquerors take on Anaheim High School. Anaheim is the third place team from the Orange League and defeated Norco in Wild Card match-up on Saturday. The winner of Tuesday’s match will move on to play on Thursday against the winner of the Torrance/St. Monica Catholic match. If Torrance wins, the Conquerors will play at home on Thursday but will be on the road if St. Monica is victorious.

Game time for Round 1 of the CIF Playoffs on Tuesday is 6pm in the Conqueror Gym.  Ticket sales will begin at 5pm and ticket prices are $10 for adults and $5 for students and children 5-13 years of age.