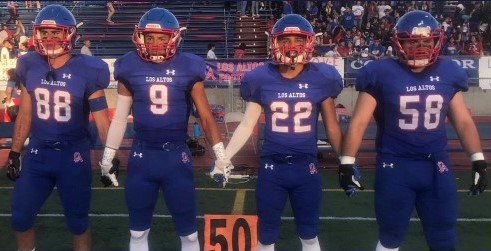 The Los Altos Football team was coming into the 2019 with some doubters and questions marks.  Most of those doubts and questions were answered on Friday night as the Conquerors rolled to 49-6 victory over Covina.  Los Altos found the endzone seven times and while the defense put the clamps on the Colts only giving up one late game touchdown.

The Conqs took a while to find their offensive rhythm but were almost unstoppable once they got it going.  The offense put a long drive together late in the first quarter that was capped off with a run from a yard out by Orellius Visaya.  They then scored on a screen pass from Davey Hacegaba to Isaiah Verdugo.  The defense came through on the next series and held Covina at the goal line and forced a turnover on downs.  The Conqs took that opportunity and capitalized as Hacegaba connected with tight end Johnny Tirre for a short touchdown pass.  Senior Rene Zaldivar led the team to halftime as he picked off a pass on defense, then took a short reception and turned it into a 60 yard touchdown to send the teams to the break with Los Altos up 28-0.

Zaldivar wasn’t done as he took the second half opening kickoff 75 yards and increased the Conquerors lead to 35-0.  Zaldivar finished off his night with a touchdown run from 4 yards out.  The boys werent satisfied with the 42 points as Justin Gaytan hooked up with Zedekiah Rodriguez for a 63 yard touchdown to cap off the Conquerors scoring.  Covina added a touchdown late but the Conquerors cruised to a 49-6.

The Conquerors will meet up with Crosstown Rival, the Wilson Wildcats on Friday at Wilson High School.  Game Time is 7 PM.  Tickets are $7 for adults and $3 for kids ages 5-12.  Students with ASB are free.  Los Altos students and fans should enter in the Countrywood ticket booth and gate.