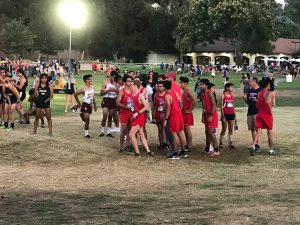 This weekend the Los Altos Cross Country team traveled to Brookside Park located next to the historic Rose Bowl to compete in the Cool Breeze Invitational. Though it is the first meet of the season, the meet is run like a post-season invite with a fast course and lots of CIF ranked teams. The Los Altos Boys team placed 8th out of 20, managing to overcome getting smashed towards the back in the first 200 meters of the race. They all moved up with eventual race winner Luke Francis r 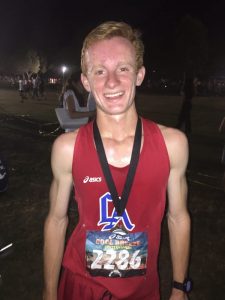 unning in the top two for most of the race. Luke finished in the top spot, placing first out of 275 runners.  His time of 15 minutes and 14 seconds was a personal best for the senior. Karl Fernandez and Brandon Leung, both first year to varsity runners, moved up over 30 spots in the second half of the race and helped the team move up to a top 10 finish.

On the girls side the Conquerors fielded an incomplete team with two freshman lacing up to run varsity. Big races were turned in by team leader Denise Rodriguez, who ran the course in 19:54 for a great opening time as well as freshman Sophia Lespron who, though new to cross country , took the race in stride and was able to solidify her spot on the team.  Big things are coming her way!

Next up for the Conquerors is the first league race of the season.  The Conquerors begin the battle for a Hacienda League Title on Wednesday at Bonelli Park @ 4pm.