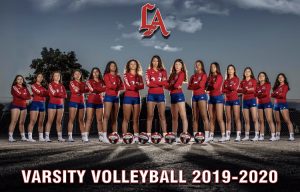 The Los Altos Girls Volleyball team has set lofty goals for itself going into the 2019 season. The squad has worked all spring and summer to prepare to make a run at their 8th straight Hacienda League title and also have high hopes for CIF. This years team is carrying 9 seniors, many of which are 3 or 4 year varsity players, and is looking to avenge a tough first round loss in last years CIF playoffs.

The girls are off to a 6-2 start and have been dominant in those 6 wins, only dropping 1 set in the process.  The 2 losses have come to worthy adversaries in La Canada and La Salle, both of which are top teams in Division 3. In the latest Area Rankings the Lady Conquerors come in at #7 while La Canada and La Salle made the top 5.

Sophomore Kathy Porter was listed as one of the area “Players to Watch” in the preseason and has not disappointed thus far as she leads the team with 69 kills. Seniors Jada Smith, Sofia Hess, and Jenica Hernandez are the other kill and hitting percentage leaders on the team. Senior Adrianna Gonzalez leads the team in assists with 123 while Soledad Sibal leads the team with 114 digs.

The girls are in the midst of a tough patch in their season where they will play 3 non-league games this week and finish things off with the Whittier Tournament on Friday and Saturday.  That will conclude the non-league schedule with Hacienda League matches starting on September 17th against West Covina and Diamond Ranch on the 19th.