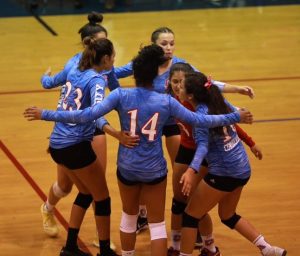 The Los Altos Girls Volleyball team has had a busy and successful week but it’s still not over. The girls had 3 non-league matches scheduled this week in addition to their first tournament of the young season. The week began with Monday’s match against Mayfair in which the Conquerors dispatched of them in 3 straight. On Tuesday, the girls hosted Bishop Amat which resulted in another 3 set victory. Thursday the girls traveled over the hill to Whittier Christian where they once again came away with a 3 set win. Three games in four days, three wins and they didn’t drop a set.

The demanding week continues today and tomorrow as the girls take part in the Whittier Tournament. Los Altos will take on El Rancho, St. Pius X and Brentwood today and then have another 3 matches on Saturday.  Next week the girls open Hacienda Leauge play against West Covina and Diamond Ranch.