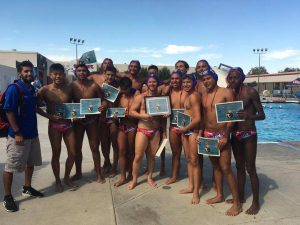 The Los Altos Boys Water Polo team has been put to the test this season. A tough early season schedule, including three tournaments, has challenged the boys buts now seems to be paying off. The team is currently riding a 7 game win streak and have improved their record to 11-8 as they head into Hacienda League play next week.

The season looked bleak early on as at one point the team was staring at a 1-7 record. The boys struggled early as they took on some mighty competition in the Long Beach Poly Tournament. The group righted the ship in the Ayala Tournament as they went 3-1 against more local competition. Last weekend the team took part in the Thrills in the Hills Tournament and won the Silver Division going undefeated in the tournament.  This week they have continued their strong play, taking down Montclair and El Rancho.

Next week the boys host Baldwin Park in their last pre-league tune up before heading to Webb on Thursday for their first Hacienda League game. The boys are currently ranked #7 in CIF Division 6 and look to be contenders for a Hacienda League Title but will need to keep the tough-minded mentality as the season still has over a month more to go.