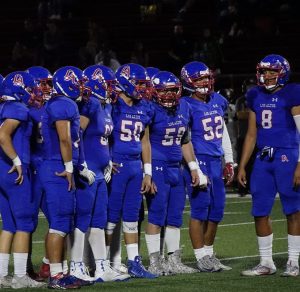 Justin Gaytan transferred from Northview to Los Altos over the summer because he figured he had a better chance of being a quarterback, something that would have been tough for him at Northview, because James Jimenez is a senior and he had a big season last year.

Gaytan and David Hacegaba have shared quarterback duties this season for Los Altos, but with undefeated Northview visiting on Friday, the Conquerors turned the keys over to Gaytan, and he delivered with a vengeance against his former team, showing he’s much more than a back-up QB.

“I don’t think you can write a script better,” Los Altos coach Travis Brown said of Gaytan’s performance. “He’s a great kid and I know this was personal for him. We teach our guys to stay focused on the team goal and he came out and executed. We couldn’t of asked for more.”

Gaytan threw for 213 yards and three touchdowns and rushed for another score as Los Altos crushed Northview 36-14 in nonleague play on its homecoming.

“I have to give it all to my line, great blocking,” Gaytan said. “My coaches said from day one, stay focused, this team is going to be physical but at the end, we finished.”

Still, beating Northview had to be satisfying.

“It’s satisfying enough to go from a good school to another good school and show them what they missed out on,” Gaytan said. “Don’t sleep on us, we’re coming.”

Gaytan didn’t do it alone. Running back Rene Zaldivar constantly moved the chains and finished with 67 yards and a score, and Isaiah Verdugo caught two touchdown passes as Los Altos improved to 4-1, with its only loss coming last week against undefeated Glendora.

“We’ve done a lot of things to clean up our team ball, a lot more discipline,” Brown said. “That’s a really good team over there, and we went out and executed our game plan as a team.

“We came out and wanted to be more physical and bring back Los Altos football and as a team, we did an amazing job across the board.”

Northview had been on a roll, a winner of 16 of 17 since last season, and is ranked No. 5 in CIF Southern Section Division 7, but it simply ran into a team that was more physical, limiting the Vikings’ high-powered aerial offense and pressuring Jimenez all night.

Jimenez rushed for a 2-yard TD late, but he never found the end zone or his rhythm, throwing for just 110 yards.

“That’s a good ballclub,” Norhview coach Marcel Perez said. “Coach Brown is doing a great job. We were in position a lot tonight and just didn’t make plays. We didn’t tackle. You can’t arm tackle and win games like this. We will learn a lot, watch film tomorrow and correct the things we need to correct and get ready for league.”

The Vikings scored first, then it was all downhill.

Cheo Mendoza took a big hit but held on to Jimenez’s 27-yard pass to the Los Altos 2 yard line, and that set up Deshon Thompson, who ran around the outside for the 2-yard score and a 7-0 lead.

The Conquerors answered by mixing the run and pass and it paid off with Gaytan’s 16-yard touchdown pass to Verdugo and with the 2-point conversion, it led 8-7.

Gaytan helped his cause some more. He followed a 27-yard pass with an 18-yard run to the Vikings’ 2, and Zaldivar took it from there, plowing in for a touchdown and 14-7.

The Conquerors got the ball back and Gayton ran in a 15-yard touchdown as time expired to give his team a 22-7 lead at halftime.

Gaytan picked up where he left off in the second half. After two 17-yard passes, he finished an early third-quarter drive with a 38-yard strike over the middle to Verdugo for a 29-7 lead.

Gaytan threw his third touchdown pass to Zedekiah Rodriguez, a 27-yard completion to the corner for a 36-7 lead that they took to the fourth quarter.