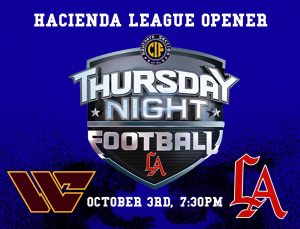 It has been a few years since the fan base for Los Altos has had a legitimate reason to be excited about its football team.

But after a very successful showing in its nonleague games, which saw Los Altos post a 4-1 record with impressive wins over Northview, Monrovia and Covina, the Conquerors appear to be a serious threat this season for the Hacienda League crown.

The Conquerors play their league opener Thursday at home against West Covina (0-5) at 7:30 p.m.

Los Altos looked impressive two weeks ago as it throttled visiting Northview, 36-14. Quarterback Justin Gaytan, a transfer from Northview, spearheaded the attack as he threw for 213 yards and three touchdowns and rushed for one score.

“I have to give it all to my line, great blocking,” Gaytan said. “My coaches said from day one, stay focused, this team is going to be physical but at the end, we finished.”

Another player who has produced consistently is running back Rene Zaldivar. The senior rushed for 67 yards and scored a touchdown in the win over the Vikings.

West Covina (0-5) has fallen on hard times. The Bulldogs haven’t recorded a winning record since 2016, but they did post a 22-14 upset against the Conquerors in the season-finale last year.

Junior running back Drew Hall has been one of the few bright spots for Bulldogs fans, rushing for a team-high 344 yards.