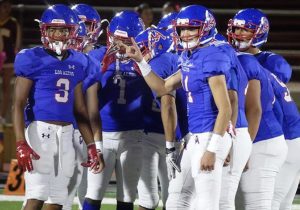 The Los Altos Football team got off to a slow start on Thursday night but once it got rolling there was no stopping them.  The Conquerors took on West Covina last Thursday in the Hacienda League opener looking to avenge their loss from last season.  The The defense took a series to figure out the Bulldog’s Wing-T style offense and gave up a big run for a touchdown in the process.  However, after that touchdown the defense tightened up and didn’t give up another score all night. In fact, the defense swarmed and put pressure on West Covina, racking up tackles for losses and forcing fumbles.

The offense also started slow but once it got on track, there was no stopping it.  The Conquerors put up 49 points with 4 different players finding the endzone.  Running Back Jonathan Lopez scored a receiving touchdown and added a rushing touchdown late in the game.  Rene Zaldivar broke for a 42 yard rushing touchdown in the second half adding to his impressive season totals. The Rodriguez brothers continued to show off their quick strike abilities and accounted for 4 scores between the two of them. Zecheriah Rodriguez accounted for the first 2 scores for Los Altos as he had a receiving touchdown in the first quarter and followed that up on the defensive side of the ball when he picked up a fumble and took it in for his second touchdown.  Zedekiah Rodriguez continued to improve upon his impressive junior season and caught 2 more touchdowns, repeatedly getting behind the Bulldog defense and burning them deep.

The Conquerors hit the road this week to take on Diamond Ranch in a battle for the top spot in the Hacienda League. 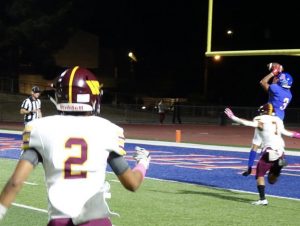 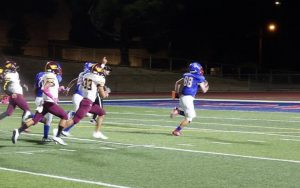 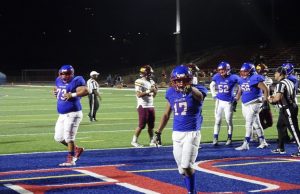