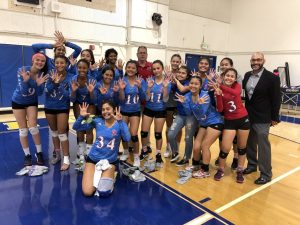 The Girls Volleyball Team at Los Altos has been the model of consistency over the past decade. On Tuesday, the girls clinched their 8th straight league title with a dominant win over Charter Oak. The girls have once again put forth a great season with a 23-5 overall record and an 8-1 record in league. The team got a scare put into them when they lost in 5 sets to Walnut but have not dropped a set since then, dominating their opposition. Tuesday’s win gives the Lady Conquerors sole possession of first place in the Hacienda League and will guarantee a first round home game when the CIF playoffs begin next Thursday.

This current string of 8 league titles has been the most impressive stretch of success that this proud program has ever had. In the 1970’s the Girls Volleyball program won 5 straight league titles from ’74 -’78, then the program didn’t win another league title until 1988 followed by three in a row from 1990-92 and another in ’96. The girls won league titles again in 2004 and 2007 and then began this current run in 2012.

This year’s squad has been dominant in their victories and this senior heavy group that is aiming to leave a legacy that won’t soon be forgotten.  The regular season concludes on Thursday as the girls host South Hills at 5:30. CIF Brackets will be released on Saturday at noon.