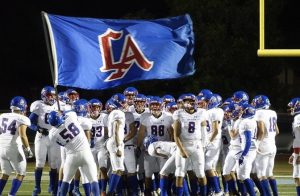 The Conqueror Football team needed to get themselves right this week after a tough loss to Diamond Ranch. With a short week of preparation for a Thursday night game, the Conquerors definitely got themselves back on track putting up 57 points on the Walnut Mustangs.

Thursday’s game was never in doubt as the score was 14-0 before the Conquerors lined up for an offensive snap.  The defense forced a fumble on Walnut’s first possession which Zecheriah Rodriguez picked up and returned for a score. 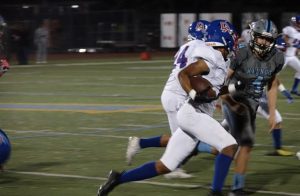 On the next possession, Walnut punted and Zedekiah Rodriguez returned it down the sideline for a touchdown. Once the Conquerors got the ball on offense, the onslaught continued with Rene Zaldivar getting into the mix with a long touchdown run of his own. Orellius Visaya added 6 more just before halftime with a 93-yard run that gave the Conquerors a 28 point lead.

The second half was more of the same as quarterback Davey Hacegaba scored a on QB run, followed by a long TD run from Isaiah Verdugo.  Later in the 3rd quarter with a running clock on the board, Hacegaba threw a short pass to Zed Rodriguez who stiff armed a defender and scampered in for his second TD of the night. The scoring concluded late in the 4th quarter 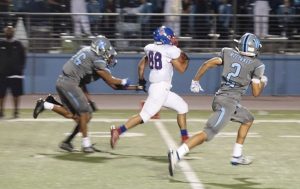 with Justin Gaytan running the QB option in for a late score.

Los Altos will have its final regular season home game on Friday as the Conquerors host the Charter Oak Chargers at 7pm. 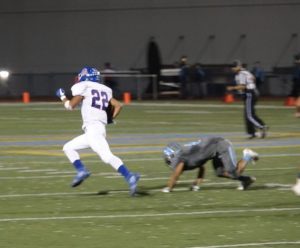