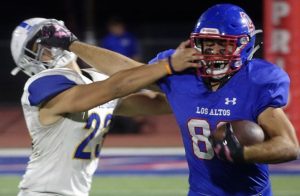 The Conqueror Football team dropped 44 points on Charter Oak last Friday and has set itself up for a showdown in the last week of league play.  The Conquerors jumped all over the Chargers scoring twice in the first quarter and again before the half.  Quarterback Davey Hacegaba got things started when he took a bobbled snap and turned into a touchdown run. 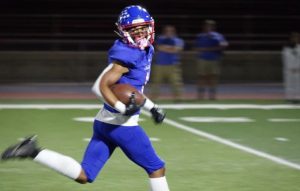 Zedekiah Rodriguez showed off his return skills when he picked up a bouncing punt and weaved through traffic 70 yards for the score. Rodriguez scored again in the second quarter when a scrambling Hacegaba threw a beautiful ball to the back of the endzone and Rodriguez snagged it and got both feet down for the touchdown.

The second half was much of the same from the Conqueror offense as Hacegaba connected with Diego “Fuzz” Moreno on a simple out route that he turned into a 73-yard score, outracing the defense down the sideline. The Conqueror defense was stifling as always, stuffing the Charger running game and putting constant pressure on the quarterback. 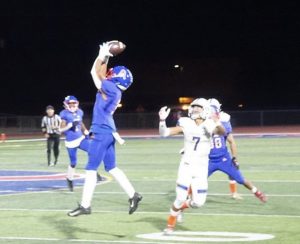 Zecheriah Rodriguez picked off an errant pass in the 3rd quarter which resulted in the Rene Zaldivar scoring on a screen pass on the ensuing possession.  The Conqueror defense once again came up big when Orellius Visaya had a leaping strip sack that was recovered by Los Altos. Once again Zaldivar made it hurt as he took advantage of excellent downfield blocking by his receivers and scored his second touchdown of the night.  The Conquerors capped of the scoring with a field goal from Jacob Gonzalez in the 4th quarter.

The victory puts Los Altos into a tie for second place with South Hills. Both teams will battle it out on Friday night at Covina District Field at 7pm. The game is important for seeding reasons as CIF brackets are released on Sunday and both teams are fighting for spot in their respective divisions.

Congrats to the #LosAltosFootballTeam on their 44-7 #win this past Friday vs Charter Oak Highschool. #FridayNightLights #LosAltos #HaciendaHeights #Pride #Family #Tradition #HighSchoolFootball