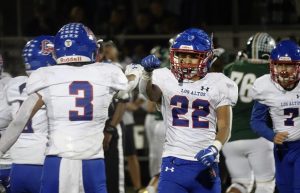 The Los Altos Football team finished off its regular season with a 21-7 victory over South Hills which solidified their spot as the #2 team from the Hacienda League. While the team was hoping to have a first round home playoff game, the selection committee awarded two other second place teams home games because they both had 9-1 records. The Conquerors will now have to travel deep into Orange County to take on the San Joaquin League Champions, St. Margaret’s. St. Margaret’s Episcopal School is located in San Juan Capistrano.  Game time is set for 7pm and CIF tickets are $10 for adults and $5 for students with ID and children 5-13 years of age.