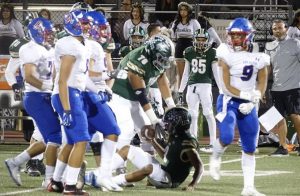 Los Altos football team finally wore down South Hills in the second half and beat the Huskies 21-7 in the final game of the regular season Friday night at Covina District field.

The win gave the Conquerors (8-2, 4-1) sole possession of second place in the Hacienda League and likely a home game in the first round of the CIF Southern Section Division 6 playoffs when the pairings are announced on Sunday.

“As a second place team we hope we’ll have a home game in the playoffs next week,” Conquerors coach Travis Brown said. “You always want that home field advantage but, we’ll take it for what it’s worth. Home or on the road we’ll have to get ready for whoever it is.”

The Huskies (5-5, 3-2) finished third in league play but will have a tough road game in the playoffs after being moved to Division 4 after winning the Division 6 crown last year.

The Huskies will also be without quarterback Khalil Ali, who completed 17 of 33 passes for 233 yards before being ejected for throwing a punch with 4:36 left in the game.

The Conquerors scored on their first possession of the third quarter after the teams battled to a scoreless first half.

Senior running back Rene Zaldivar went 51 yards for the first score of the game with only 1:02 gone in the second half.

He finished with 191 yards on 14 carries to lead the Conquerors.

“We made the right adjustments to get to the edge in the second half,” Brown said. “We changed a couple of blocking schemes and we did everything we could to maximize that.”

Orellius Visaya scored the second Conquerors touchdown on a two-yard run with 57 seconds left in the third quarter.

Visaya carried carried 13 times for 114 yards as Conquerors rushed for 249 of their 334 yards in the second half.

The Huskies squandered chances by turning the ball over deep in Conquerors territory.

They drove to the Conquerors 16-yard line with 1:34 left in the first quarter and appeared to have a touchdown when Ali completed a pass that was fumbled into the end zone and ruled a touchback.

“We thought we recovered that and should have had a touchdown,” Huskies first-year coach Danilo Robinson said. “That was a disappointment and it definitely changed the complexion of the game. We had our chances and opportunities and we didn’t get it done.”

Trailing 14-0 the Huskies drove to the Conquerors 9-yard line when cornerback Zedekiah Rodriguez intercepted a tipped pass at the five yard line.

Four plays later Zaldivar went 80 yards for his second touchdown and put the game out of reach.

“Zaldivar is a good little player,” Robinson said. “We tried to keep him contained all night but he still got a couple of big plays.”

The Huskies only score came on a 25-yard interception return by Demitrius Perez with 3:03 left in the game but the Conquerors recovered the ensuing on-side kick and ran out the clock.