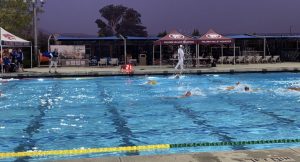 The Boys Water Polo team took a long bus ride out to the Inland Empire on Thursday and returned home from that trek with a victory.  The boys traveled to Drop Zone Water Park in Perris to take on a tough Paloma Valley squad and shook of the early nerves to emerge with an 11-7 CIF win.

The Conquerors jumped out to a 3-2 lead in the first quarter and extended that lead to 5-2 at halftime. The 3rd quarter saw a bit of a momentum change as Paloma Valley battled back and scored a couple late goals to make the score 6-4. The Conquerors sprung to life with the 4th quarter whistle. Paloma Valley took the first possession and scored cutting the lead to 1 but the Conquerors answered and continued to increase their lead. Alan Castillo was a dominant force for the Conquerors seemingly scoring at will and played great defense. Abram Alarcon played a great game in the cage, knocking down shot after shot and giving the Conquerors multiple opportunities to counter the Panthers.

Los Altos advances to the Division 6 Quarterfinals and will host Whittier on Saturday Nov. 9th. Game time is set for 2pm at the Los Altos Pool.