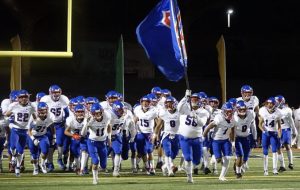 On Friday the Los Altos Football team and its supporters made the long drive out to San Juan Capistrano to take on a very good St. Margaret’s team in the first round of CIF.  The hours on the freeway and mileage racked up were all worth it as the squad returned to the San Gabriel Valley with a 17-7 victory. The Conqueror defense turned in yet another great performance and held the high-scoring Tartans to 7 points, while the Conqueror offense did all their scoring in the first half.

The game started with a 3 and out from St. Margaret’s and a poor punt that gave Los Altos great field position. The Conquerors took advantage of that field position and quarterback Davey Hacegaba found plenty of room to run and scrambled in to give the Conquerors the early lead.  On the next offensive possession, the Conquerors drove down the field and gave kicker Jacob Gonzalez a field goal opportunity which he converted on to put Los Altos up 10-0. The Conqueror defense held St. Margaret’s in check the whole half, keeping the Tartan offense from crossing the 50-yard line. With time running out in the half, the Conquerors converted a big third down when Hacegaba completed a screen to Zecheriah Rodriguez for a big gain that took Los Altos down to the 12 yard line. With seconds left on the clock and a pass rush in his face, Hacegaba chucked a deep ball down the far sideline that receiver Rene Zaldivar ran under and caught while diving across the goal line for the Conquerors second score.

The second half saw the St. Margaret’s offense move the ball down the field more efficiently, but the Conqueror defense held strong. The group didn’t give up the big play and kept every completed pass in front of them. St. Margaret’s finally got on the scoreboard early in the 4th quarter when they connected on a fade to the endzone. The Tartan defense made some adjustments and kept the Conquerors from putting a scoring drive together and looked to get momentum on their side when they forced a turnover on downs. With time ticking away and the Tartans moving into scoring position, the Conqueror defense came up with the big play as linebacker Johnny Tirre stepped in front of a pass for the interception. The ball was fumbled during the return but Zed Rodriguez recovered it. On the ensuing possession the Tartans forced the Conquerors to punt and got the ball back with a couple minutes left to play. Once again, the defense stepped up and forced 4 straight incomplete passes and a turnover on downs, securing the victory.

The Conquerors will now move to the Division 6 Quarterfinals and will host La Serna on Friday. Game time is set for 7pm at Pat Mauch Stadium and gates will open at 5:45. Tickets are $10 for adults and $5 for students with ID and children 5-13 years of age.

Congratulations to our Los Altos Conquerors on their CIF Division 6 First Round victory over St. Margaret’s! The matchup proved to test the boys’ mettle and resilience. They move onto to the quarterfinals vs La Serna. Let’s keep it going, Conqs! #losaltosfootball #cifplayoffs #haciendaheights #fridaynightlights #pride #family #tradition #win