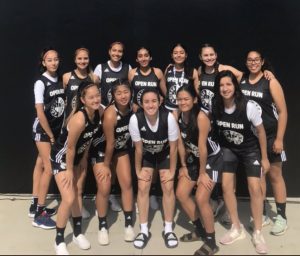 Once again the Lady Conquerors have been placed into Division 2AA by CIF.  Last year the squad lost a heartbreaker to Warren on a last second shot that knocked them out in the 2nd round. Most of that team will be back for the 2019-20 campaign with 7 returners all logging significant minutes last season and looking to build upon that this year.

Seniors Madelyn Roel and Danielle Pineda are the teams 1-2 punch and will lead the Conquerors offensively. Senior Jenica Hernandez will be the teams rim protector and presence in the paint. Sharpshooting Emma Magana and point guard Christina Liao are expected to be the catalysts of the team and push the tempo. Sophomores Vhenus Gaoa and Jackie Mai now have a year of varsity experience and will continue to contribute, especially on the defensive end.

Coach Nakamura is excited about this veteran group and expects the team to compete for a 4th straight league championship and make a deep run in the CIF Playoffs.  The girls will get their season started on December 2nd against Claremont in the Bonita Tournament.