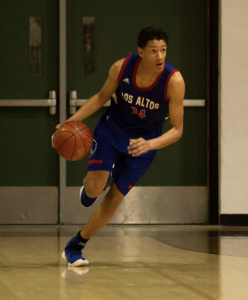 Senior Dion Porter was named named San Gabriel Valley Boys Athlete of the Week for his efforts in the Cantwell Tournament before Thanksgiving. Dion scored 19 points in Los Altos’ 60-53 win over Gahr in the championship game of the Cantwell Sacred Heart tournament and was named the tournament MVP.  He also had 27 points in a 75-49 victory over Torrance earlier in the tourney. Los Altos is 4-0 and will play La Puente on Tuesday before taking part in the Bellflower Buc Pride Classic next week.