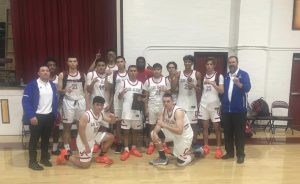 The Los Altos Boys Basketball team is off to a 4-0 start to the season and collected their first championship along the way.  The week before Thanksgiving, the boys took part in the Cantwell Tournament and competed against some quality competition.  The squad went 4-0 and senior Dion Porter was named the Tournament MVP for his play in the four games.

The season opener was a 26 point victory over Torrance in which Porter scored 27.  Game 2 saw the Conquerors struggle to get going offensively and hung on to a slim 47-43 victory over Bishop Amat.  The semifinal matchup against St. Francis was a competitive game in which the Conquerors took the lead before the half and held onto to the entire 2nd half, using a balanced attack with numerous Conquerors chipping in points and clutch defense.  The championship match up with Gahr was another battle that saw the Conqs pull out the 60-53 victory led by another strong performance by Dion Porter and a good game by freshmen Jazz Gardner.

Coach Lucas has been happy with the balanced attack of the offense which has seen numerous Conquerors contributing points. The squad has numerous weapons that will force teams to play good team defense.  The Conqueror defense has been another bright spot early on as the team has held 4 of their 5 opponents under 50 points and Gahr only getting 53.  Jazz Gardner’s presence in the middle is a big part of that but the perimeter defense has been solid as well.

The Conquerors defeated La Puente in a non-league contest on Tuesday, 77-41, and will be off the rest of the week before resuming play next week in the Bellflower Buc Pride Classic.