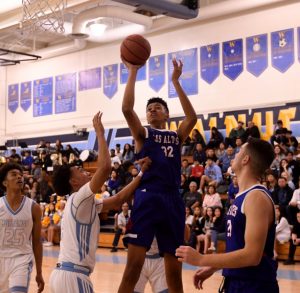 Los Altos and Walnut renewed its annual boys basketball rivalry Wednesday. It’s one that will be talked about for years to come.

Overcoming a 10-point deficit, Los Altos defeated host Walnut 66-63 in overtime in a crucial Hacienda League game. The win gave the Conquerors a one-game lead in the league standings.

“We have a lot of guys that are second- and third-year varsity players, and I think their experience was key in the victory tonight.” Los Altos coach Jeff Lucas said. “It’s always tough to come into this place. (Walnut) played us really tough like they always do.”

Dion Porter, who scored 14 points along with five rebounds, connected on two baskets in the overtime period that helped give the Conquerors a 65-61 lead.

“This was his first game in 15 days, and you could tell that he was not in an offensive rhythm,” Lucas said. “He’s one of those players that has a lot of experience in games like this and it came in handy.”

Jazz Gardner, considered one of the top freshmen in Southern California, played a big role for Los Altos (16-3, 3-0 league) by scoring 14 points and grabbing eight rebounds.

The unsung hero of the night was forward Aibigho Ujadughele. The senior pumped in 12 points, snatched eight rebounds and applied terrific defensive pressure throughout the game.

He helped kick-start the Los Altos comeback early in the fourth quarter with two key baskets.

There was nothing fancy about Wednesday’s encounter. Every possession was hotly contested as players regularly grabbed loose rebounds and played hard inside the key.

In the early stages of the fourth quarter, it appeared as if the Mustangs might come out with the victory.

By going on an 8-2 run, the Mustangs opened up a 51-41 lead. However, the Conquerors rallied late in the fourth quarter and tied the game at 54 on a field goal by Porter.

After a series of possessions that led to both teams making free throws, Los Altos had an opportunity to win in the final seconds. Ozzy Cuellar’s half-court shot failed to draw iron and the game went to overtime.