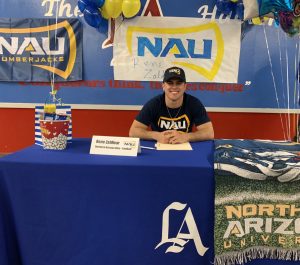 Last week, Rene Zaldivar fulfilled a dream of his and signed his National Letter of Intent to continue his academic and athletic career at the Division 1 level. Next Fall, Rene will be enroll at Northern Arizona University and be a part of Lumberjack Football.

Zaldivar has had an amazing past couple of seasons for the Conquerors as both the physical and emotional leader of the team. He has earned First Team All-League in each of the past 3 seasons, earning Offensive MVP honors last season despite playing in only half the league games.

This season Rene was an all-purpose threat that rarely left the field. He led the Conquerors in rushing, was second in receiving yards, first in kick return yards, led the team with 14 touchdowns and recorded 58 tackles and 2 interceptions on defense. Those numbers once again earned him First Team All-League honors on both sides of the ball and Zaldivar was named Co-MVP of the Hacienda League.

Rene will be taking his work ethic and talents to Flagstaff, Arizona next year where the Lumberjacks compete in the Big Sky Conference. The Lumberjacks open the season at Arizona State next season. 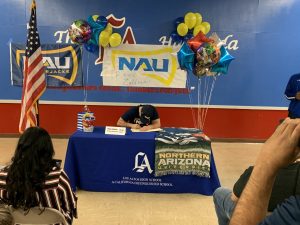