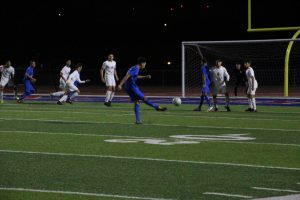 The past 2 seasons have not been kind to the Boys Soccer team as they have finished below .500 and failed to make the playoffs. Those struggles seem to be a thing of the past as this years squad sits atop the Hacienda League after 1 round of league play. The team is 9-6-1 overall and 4-1 in league. Tough early competition seems to have prepared the team for a run at a league title. Early season close losses perennial powers like Sierra Vista and El Monte showed this group that they have the capability to play at a high level. The team lost the league opener to West Covina, but have won four straight since then.  The boys will have the opportunity to avenge that loss on Friday at West Covina.

Sophomore Ernesto Figueroa has been the offensive catalyst for this group as he has scored a goal in each league game including a hat trick against Walnut. The defense is led by brothers Marco and Antonio Barajas while freshman Adam Cardenas has been solid in his first high school season. Four year starter Michael Sedano is the leader in the Midfield while sophomores Javier Murillo and Agustin Leiva help control the game.

Coach Javier Arellano says the team is playing good all around soccer and the subs coming in off the bench are also key contributors. Arellano attributes the first half success to a renewed interest in hard work. “This group has bought into the idea that they need to work hard during their training sessions every single day and they can’t just go through the motions”.  With 5 league games remaining, the club has a slight lead in the standings over Charter Oak  (3-1-1) and Walnut (3-2).  The boys will need to play well down the stretch to capture their first league title since 2016.